Tusk to Tail: With the Gamecocks down, it’s time to bring on Bobby’s Bears

A couple of hours before the Hogs kicked off against South Carolina at 11 a.m., Saturday, I thought my watch must be broken. There was no way it could only be 9:15. Our tailgate tents and the entire campus were already crackling with energy as 70,000 of our closest friends celebrated the SEC opener.

Tusk to Tail had started the party shortly before 7 that morning, when the surrounding streets were closed to traffic. Buffet tables were covered with delicious breakfast casseroles, pastries, sausage, biscuits, and crock pots full of gravy. Forrest once again displayed exceptional perception and motivation by smothering a plate of Chick-fil-A Chick-n-Minis with Chef Brad’s sausage gravy.

You can’t drink all day if you don’t start in the morning. Our officially licensed Arkansas Razorbacks bar served Irish coffee, mimosas, Bloody Marys and of course our signature John Daly cocktail while the two satellite TVs dialed up ESPN and the SEC Network. Fraternity pledges at a nearby tent set up an industrial sized frozen margarita machine. I told the boys that they would have a hard time keeping the drinks frozen in the Arkansas heat, a lesson we learned at last year’s Texas game. The look they gave in return suggested they would power through it.

Hogtown was getting down to the rocking country sounds of Abbey Pierce and The Sinners. The local band features Razorback Foundation Executive Director Scott Varady on drums, and welcomed Arkansas women’s basketball coach Mike Neighbors to sit in on acoustic guitar. When it comes to playing music, Varady is an excellent attorney, but the band’s setlist was a refreshing change of pace from the typical 80s standards played on that stage before games. 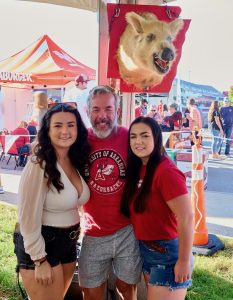 (from left) Bebe Houser, Greg Houser and Laney Houser at the Tusk to Tail tent. (photo by Mark Wagner)

South Carolina joined the SEC along with Arkansas back in 1992. Both teams have experienced a similar trajectory of football futility, punctuated by short bursts of success. Like the Razorbacks, Carolina is rebuilding its football foundation with a former Georgia assistant who had previously coached at their school. Gamecock Coach Shane Beamer and Head Hog Sam Pittman worked together in Athens during the 2016 and 2017 seasons.

Despite the distance to Arkansas, a fair number of South Carolina fans traveled to see their team. Several tables at Doe’s Eat Place began a Gamecocks cheer on Friday, and we saw a few hundred more fans around Hogtown and Victory Village before the game. The Gamecock fans I visited were steeped in southern hospitality. They were kind and outgoing, unlike the irrationally arrogant Cincinnati followers I met last week.

By gametime, the delightful autumn morning had warmed considerably beneath the unrelenting sun. Eighty-four degrees hits different when you’re sitting in a metal bowl like popcorn. While the wise tailgaters applied sunscreen, I drank gin and ate sausage cheese balls. A little vitamin D might do me some good, and besides, who wants to touch their face with greasy sausage fingers? One can only wipe so much on their shorts. Four hours later everyone said that it hurt to look at me, which is a terrible thing to say, sunburn or not.

The stadium wasn’t quite as packed as the previous week against the Bearcats, a likely by-product of the early kickoff. Considering that Razorback Stadium experienced 6-foot social distancing between fans for years before the COVID-19 pandemic, it was still a good crowd of 72,437 rowdy Razorback fans. 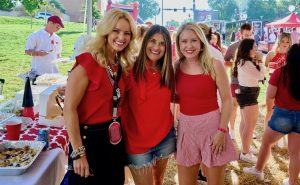 I have been coming to games here since the 1970s but something about the Arkansas pregame traditions still gets me every single time. As the band formed the A for the players to run through and Pat Summerall’s narration of the pregame hype video began, the hair on my arms all stood on end. I showed my wife, who revealed her own limbs covered in goosebumps, and she’s not even from Arkansas.

All week, Hog fans voiced concern over how our secondary would fare against Gamecock QB Spencer Rattler. Rattler had been considered a preseason favorite to win the Heisman last season at Oklahoma before transferring to Carolina. Meanwhile the Razorbacks lost two starting defensive backs, including all-SEC junior safety Jalen Catalon, to injury the week prior. Pittman later confirmed that Catalon would miss the rest of the season.

Rattler had decent stats, throwing for 376 yards and a touchdown against Arkansas. But the Hogs’ defense kept Rattler rattled, forcing an interception, three fumbles (one recovered by Arkansas), and a safety when Rattler grounded the ball from the endzone to avoid a sack.

Alabama transfer linebacker Drew Sanders was an absolute beast for the Razorbacks, recording 11 total tackles (8 solo), 3 tackles for loss (including 2 sacks), and one pass defended. Sanders was awarded Walter Camp National Defensive Player of the Week honors for his performance.

Drew was not the only Arkansas Cock commander. The Razorbacks’ offensive performance was pretty good too. Quarterback KJ Jefferson completed 85.7% of his passes (18-of-21) for 162 yards and one TD. Jefferson carried the ball 19 times for 67 yards and another score. It was the 5th time in Jefferson’s career to both rush and pass for at least one touchdown. Three Arkansas running backs (Raheim “Rocket” Sanders, AJ Green, and Rashod Dubinion) each crossed the goal line, highlighted by Rocket’s 24 carries for 157 yards and 2 TDs. Surprisingly, Rocket was the first Hog to record back-to-back 100-yard games in the Pittman era.

The game was never really in doubt, as the Razorbacks whipped the Gamecocks 44-30. The Hogs’ dominant win on a day filled with college football upsets moved Arkansas to #10 in the Associated Press poll.

Tusk to Tail says, “Bring it on, Bobby.” For the better part of a decade, Arkansas football was stuck in the ditch where Petrino crashed his Harley-Davidson. Pittman finally has the Hogs back on the right path. We are hoping that Petrino and the Bears are little more than a speed bump on what is shaping up to be a very special season.