The Razorbacks take the field Saturday (Sept. 10) in the matchup with the South Carolina Gamecocks. (photo by Mark Wagner)

Tusk to Tail: Hogs control Gamecocks and the Rattler, off to 2-0 start

The Arkansas Razorbacks on Saturday (Sept. 10) followed the home opener victory over then No. 25 Cincinnati with a 44-30 win over SEC opponent South Carolina. Arkansas set the tone early by scoring touchdowns on its first three possessions.

Arkansas has won consecutive SEC openers for first time since 2003 & 2004. Also, a 2-0 start leads the Hogs into a non-conference game with Missouri State before the a tough two-game stretch with Texas A&M (Sept. 24) and Alabama (Oct. 1).

Coach Sam Pittman said he is happy with a 2-0 start but said they have areas to improve. 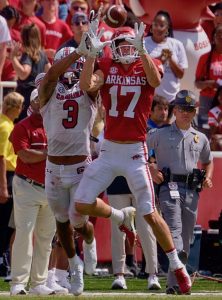 Defensive back Hudson Clark steps in front of a pass. (photo by Mark Wagner)

“We were a little slippery on pass protection but I think the offensive line wore them down. We made a lot of big plays on defense; a lot of sacks, hurries, this that and the other. We gave up a lot. Three hands to the face (penalties) and things like that. We certainly haven’t had that in practice but we had it out here today and we’ve got to clean that up as well,” Pittman said after the game. “I thought the defense made some big plays and (Raheim) Rocket Sanders and the backs ran well. I thought we used our wideouts a little bit better today. We used all of them and each one of them contributed certainly in the blocking aspect but to the win as well.”

Following are other notes about the game provided by the University of Arkansas.
• RB Raheim Sanders recorded his third career multi-rushing TD game. Dating back to last season, Sanders has rushed for two TDs in three of the last four games.
• RB Raheim Sanders has rushed for 100+ yards in back-to-back games (117 in game 1 and 156 in game two). He’s the first Arkansas rusher to run for 100+ yards in back-to-back contests since RB Rakeem Boyd (2019).
• QB KJ Jefferson registered his fifth career game with at least one passing touchdown and at least one score on the ground. Jefferson completed 85.7% of his passes (18-of-21 passes) for 162 yards and one TD. His completion percentage ranks second in school history. The record is held by Ryan Mallett at 0.875 (21-of-24) vs Tennessee Tech in 2010. Jefferson and Mallett have combined for each of the top four single-game passing percentage marks. 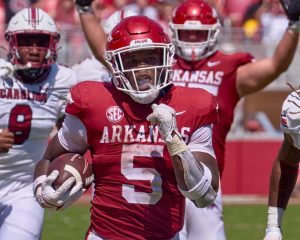 Running back Raheim “Rocket” Sanders runs for a touchdown. (photo by Mark Wagner)

• Since 2020, the Razorbacks have totaled 28 interceptions in 25 games, the most among all SEC teams in that span.
• Arkansas scored on its first three possessions (TD, TD, TD). The last time Arkansas scored on its first three possessions came in last season’s win against Texas A&M (FG, TD, TD). Last time Arkansas scored TDs on its first three possessions was 2019 vs Colorado State.
• Four different Razorbacks rushed for a TD (Raheim Sanders, K.J. Jefferson, Rashod Dubinion and AJ Green). The last time Arkansas had three players rush for touchdowns was against Georgia Southern in 2021 (Telon Smith, Dominique Johnson and Malik Hornsby).
• LB Drew Sanders logged career-highs in total tackles (11) and tackles for loss (3). Sanders’ 3 TFL are the most in a game by an Arkansas defender since Bumper Pool totaled 3 TFL against Texas A&M in 2020. 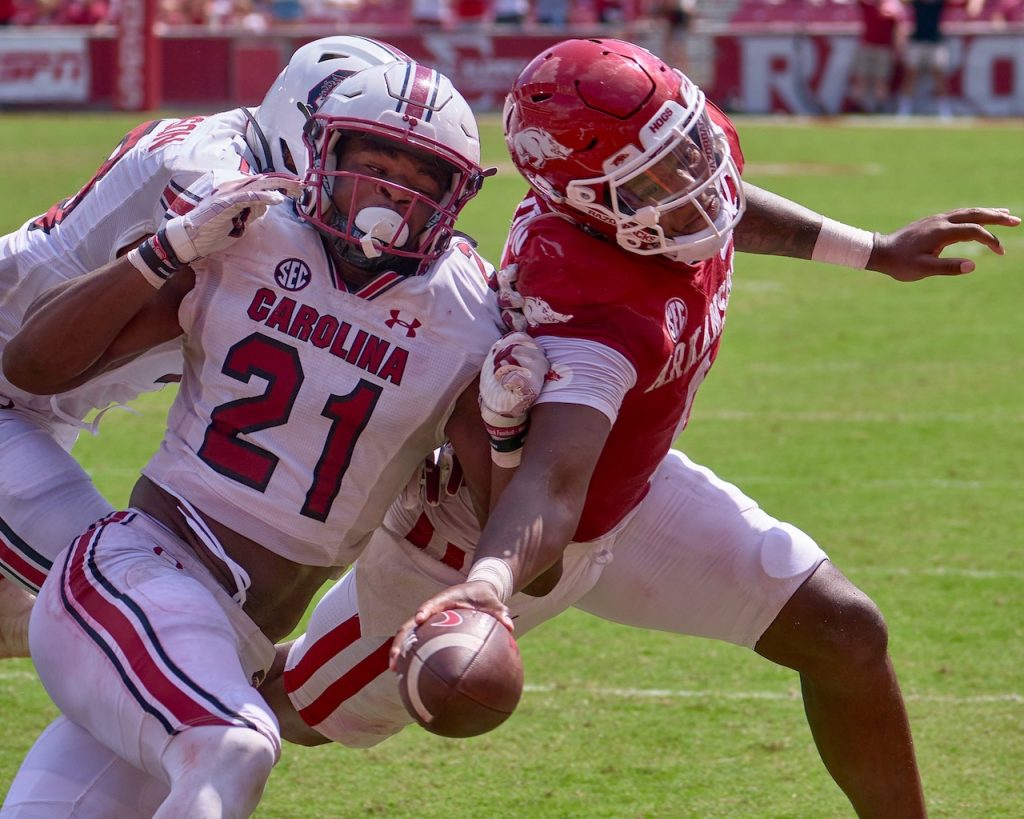