The days leading up to the 64th Liberty Bowl matchup between Arkansas and Kansas were cold and dark for many Hog fans. Six Razorbacks’ starters and nearly 20 other players had entered the transfer portal or opted out of playing the bowl game to prepare for the NFL draft.

Defensive Coordinator Barry Odom and Tight Ends Coach Dowell Loggains had left for other jobs, taking some of the players with them. Arkansas was left with gaping holes at wide receiver, tight end, linebacker, and the offensive and defensive lines. Even the Hogs’ best punter had left the building.

Kansas was mostly unaffected by portal transfers and player opt outs because quite frankly, where would they go? The perennial Big 12 cellar dweller came into the matchup well stocked and highly motivated, playing in their first bowl game since 2008.

To make matters worse, sub-freezing temperatures had wreaked havoc on the Memphis water system days before the game. Most of the host city’s downtown hotels had canceled reservations and turned away guests while the stadium was forced to bring in over 400 portable toilets. Although Liberty Bowl Stadium announced that their restrooms would be fully functional shortly before the game, the Toilet Bowl, as some had begun to call it, was quite literally looking to be a shit show.

The effects of Arkansas player attrition were immediately evident on both teams’ opening drives. The Razorbacks matriculated the ball down the field behind veteran quarterback KJ Jefferson to start the game. 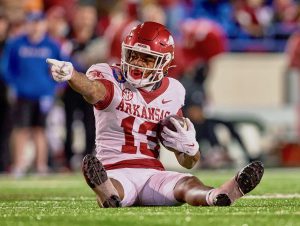 WR Jaedon Wilson signals a first down after a reception. (photo by Mark Wagner)

“Cole is playing the game of his life,” Forrest echoed. “I will have to check the roster for his first name.”

Freshman receiver Isaiah Sategna, known to be one of the fastest men in Fayetteville, was one of several fresh faces who contributed to the first series that concluded with a 37-yard Cam Little field goal. The Jayhawks promptly responded by taking advantage of the depleted Arkansas defense.

“Love that assignment football. Look at that option play,” Forrest said of the inexperienced Hogs. “We had three on two, and two guys go for the back without the ball.” Kansas QB Jalon Daniels then threw a 29 yard touchdown strike to a wide open Ky Thomas to take a 7-3 lead.

Injuries soon became a bigger concern for Arkansas. Offensive lineman Ty’kieast Crawford was hurt on the opening field goal before All-SEC running back Raheim Sanders was knocked out of the game with an apparent ankle injury in the first quarter. Rocket limped to the locker room before he returned wearing street clothes and a walking boot. 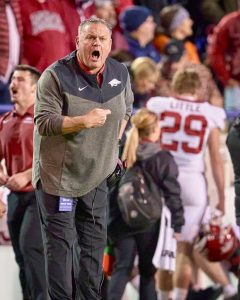 “I did not expect Sarah Huckabee to be the last Sanders standing,” I said of the Arkansas governor-elect who participated in the opening coin toss. In addition to Rocket’s injury, All American linebacker Drew Sanders had opted out of the bowl game following the season.

Big 12 teams are rarely known for their defense, but nobody could have anticipated the ensuing scoring barrage by the Hogs. After trading punts with Kansas, Jefferson’s 59 yard pass to Matt Landers completed a two-play touchdown drive.

“You can feel good about Landers,” I said.

Jefferson then added a 17-yard strike to Ty Washington to score on the first play after the Jayhawks muffed the kickoff return. Freshman defensive back Quincey McAdoo intercepted Daniels on the next drive, leading to a 3-yard rushing TD by Jefferson. Finally, AJ Green burst 20 yards into the endzone and the Hogs entered the locker room leading 31-13 at halftime. 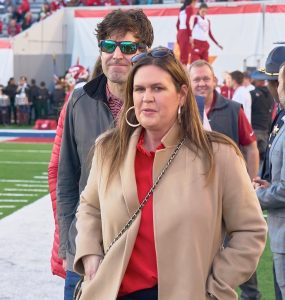 “Maybe we should have dumped those 30 guys and Odom back in October,” Chris joked.

If you were raised on classic rock like presumably most of us from Kansas and Arkansas, the Liberty Bowl has something for you. Their halftime show is a veritable rock and roll retirement home. Eddie Money had us Sh-sh-sh-shakin’ during the frigid 2010 game, and this year’s performance by Starship featuring Mickey Thomas was particularly enjoyable to those who own at least one Jefferson Airplane record. Admittedly some reviews may have been positively influenced by the afterglow of the Razorbacks’ scoring frenzy, as Starship’s hit “We built this city” is consistently ranked among the worst songs of all time.

The Hogs’ defense held Kansas to another punt to start the second half before freshman Rashod Dubinion’s 2-yard touchdown run gave Arkansas a 38-13 lead with 8:43 remaining in the third quarter. Everyone believed the game was in hand.

Our group joked about enacting the running clock mercy rule or potentially joining the Big 12 full time. The event staff began to unload cases of Liberty Bowl champion tee shirts behind the Arkansas bench. Offensive coordinator Kendal Briles browsed local takeout menus on his phone from the sideline. Ok, I made that last one up. 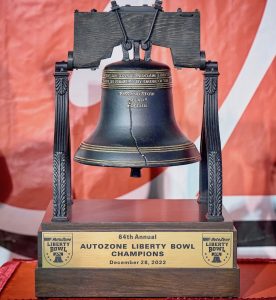 The trophy. (photo by Mark Wagner)

Seemingly content with a 25-point lead, the Razorbacks’ play calling became conservative and predictable. Four consecutive Arkansas drives lasted just 13 plays, averaging only about 2 minutes per possession. Meanwhile, there was no quit in Kansas as they clawed back 38-23 midway through the 4th quarter.

And then the officials got involved.

Despite the Razorbacks’ success, Tusk to Tail had been questioning the referee’s calls throughout the game. Multiple Kansas holding penalties went uncalled, as did at least one Kansas facemask tackle. A late first half offensive pass interference call ultimately led to a Jefferson interception. Had that been the worst of it, officiating wouldn’t be part of the story. But of all the screw jobs we have witnessed of the Hogs, nothing might ever compare to what went down that night in Memphis.

Briles had dialed up one of his patented reverse plays where just about everyone but the band touches the ball. The call actually worked, as Landers ran for 15 yards and a first down before being tackled. The ball jarred loose as Landers struck the ground, and the officials ruled the play a fumble. No problem. Anyone with two eyes could see Landers was down and the ground had caused the ball to come out. Surely the officials would overturn the call during video review. They didn’t, and don’t call me Shirley.

Unlike a regular season SEC game where video replays are monitored by supposedly unbiased officials away from the action, Liberty Bowl plays were reviewed by the same PAC 12 refs who made the original call on the field. Not unsurprisingly, the officials confirmed their own calls every single time.

Kansas quickly capitalized on the momentum. The Jayhawks scored a touchdown, recovered an onside kick, and scored another TD and 2-point conversion all in just over a minute of play. Our collective sphincters were puckered. Nevermind that none of this would have been possible if the egregious fumble call had been properly overturned. Arkansas had chances to stop the Jayhawks in regulation, and could not do it. Overtime, here we come.

The Razorbacks did their thing in the extra periods, which is to say they scored on offense and allowed the other team to score on defense. Arkansas led 53-51 in the second overtime, just needing to stop the Jayhawks’ conversion. It appeared McAdoo had done exactly that when the officials once again decided to get involved. A very late flag was thrown for targeting. Once again, the officials upheld their own call despite what appeared to be clear evidence to the contrary.

Hog fans were losing their minds, but Coach Sam Pittman and the Razorbacks kept their cool. Dubinion scored and Arkansas finally stopped Daniels to end the third OT with a win. Arkansas is better than your Kansas.

“If you don’t understand wanting to put your fist through a wall after a win, then you are not a true Razorback fan,” my friend Matt said.

As Pittman lost players and coaches leading up to the game, some fans had begun to question whether our coach was in over his head. There is no denying that this season was a step back from last year when the Hogs went 9-4 and were unbeaten in trophy games against Texas A&M, LSU, Missouri, and Penn State in the Outback Bowl.

Give Pittman credit for assembling a mix of motivated veterans and newcomers while fighting to overcome bad officiating and the ensuing momentum shift the refs created. The head Hog had to beat Kansas twice in this game. Very few coaches in the country would be able to pull that off.

Ever humble, Pittman said after the game, “It ain’t about who we don’t have here, it’s who we had. We’re Autozone Liberty Bowl champs and I’m damn proud of this football team.”