The shirt was a classic, a worn relic busted out Saturday without irony or ironing. The four letters, simple white print on a faded red tee, were an entire mood for rabid Hog fans just over a decade ago.

“It stands for Bobby My Friend Petrino,” Chris used to tell his kids during Petrino’s dominant reign as the coach of the Razorbacks. Hog fan to the core, Chris never lost respect for the offensive genius Petrino, even if he was now coaching on the Missouri State sideline.

Petrino brought along a new group of devoted followers from Springfield. Granted it’s an easy trip, but Missouri State traveled about as well as Cincinnati. It may be little coincidence that both teams contended in their respective playoffs last season. The Bears are ranked #5 in the FCS standings. 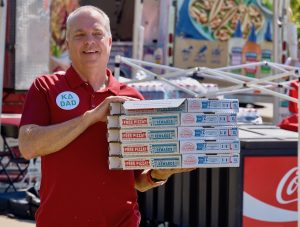 In the other corner stood the jesters, those who came to jeer the jilted Head Hog. Petrino left the program red-faced and crippled following the infamous motorcycle accident that exposed his affair with a former Arkansas volleyball player. The affair itself may not have cost Petrino his job, but the ensuing deception combined with the fact that Petrino had hired his mistress to work at the University surely did.

Even our mounted wild hog’s head Lamar sported a custom fitted neck brace. My friend Jeff saw a scooter being driven around the stadium Saturday by a guy wearing a neck brace with an inflatable nude female doll in a blonde wig strapped on his back. The guy was enjoying all the attention until his antics got him pulled over and issued a sobriety test by one of the sheriff’s deputies brought in for the game. Jeff said it didn’t look like the guy had prepared very well for the test. 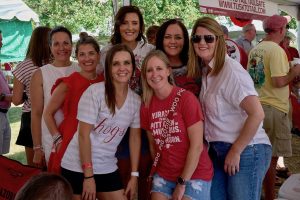 Frequent Tusk to Tail visitors and members take time for a pic. (photo by Mark Wagner)

Tusk to Tail has been plumbing the depths of post-Petrino depression since he was canned back in 2012. Petrino rehabbed his image for a year at Western Kentucky before bouncing back at Louisville to coach quarterback Lamar Jackson, who won the 2016 Heisman trophy under Petrino. The Razorbacks finished that season 7-6, choking away big second half leads to Missouri and Virginia Tech. That was a recurring theme for Arkansas under Bret Bielema, one of Petrino’s successors.

Petrino and the Hogs have both had their ups and downs since then. The downs sure seemed to outweigh the ups. Louisville fired Petrino with two games left in the 2018 season. After two years passed without any real job leads, Bobby became the head coach at Missouri State.

ESPN reports that Petrino’s first-year salary at the FCS bottom feeder was $250,000, and has increased to $325,000 per year. That is less than most position coaches make in the SEC. Meanwhile Arkansas has cycled through two-and-a-half athletic directors (What’s up, Julie Cromer Peoples?) and four-and-a-half head coaches (I see you, Barry Lunney Jr.!) since Petrino slid down the highway. 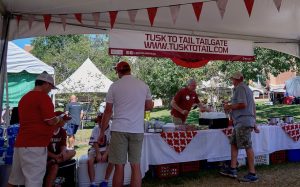 Part of the food line at the Tusk to Tail tent. (photo by Mark Wagner)

They say even a blind pig can find an occasional acorn, and that’s about how the Arkansas coaching searches began to feel. We went from Bobby “MF” Petrino to John “L.” Smith, and Smith definitely brought the Ls.

As if hiring the likes of Smith or Chaz Morris wasn’t embarrassing enough, it was rumored that such recent SEC hires as Lane Kiffin at Ole Miss, Mississippi State’s Mike Leach, and Missouri’s Eli Drinkwitz had all rebuffed the Razorbacks’ overtures after Morris’ body was thrown out the door. When living in Mississippi or Missouri becomes the better option, you have truly hit rock bottom.

Might as well offer that old offensive line coach who left to train future champions over at Georgia, right? He might not have any real head coaching experience to speak of, but everyone sure seems to like him. Razorback insiders including Trey Biddy strongly endorsed the hire of Sam Pittman from the onset. I don’t recall anyone expressing much disappointment, because seriously, how could things get any worse? I had personally grown rather numb to the process.

The rest as they say is history.

In just his third season on The Hill, Pittman has the Hogs back on the upswing with a bullet. Arkansas entered the week ranked #10, exactly where they were ranked following the Petrino scandal. It is the highest ranking the Razorbacks have earned ever since. It feels like Sisyphus finally got the rock to the top of the hill. How does the rest of that story go?

Despite a raucous crowd of 74,133 passionate fans, Arkansas appeared to be sleepwalking on the field most of the night. Tackles were missed. Balls were fumbled. KJ Jefferson threw his first interception of the season. Though the Hogs had never trailed 23rd-ranked Cincinnati or SEC rival South Carolina in the first two games, Missouri State led the Hogs 17-0 in the third quarter Saturday. Bobby MF Petrino was back in town.

The beleaguered coach continuously pulled from his greatest hits package of plays designed to get the ball into open spaces. The wheel routes previously executed by Razorbacks running back Ronnie WIngo were still gaining first downs for Petrino. That 47-yard touchdown strike to Tyrone Scott on fourth-and-one was the same play action pass thrown so successfully over the top to Greg Childs. Pittmans’s Hogs bit on the dive fake just as the likes of Texas A&M and Georgia had done before.

Speaking of Childs, the Razorbacks star receiver was seen hanging out with former teammates Cobi Hamilton and Joe Adams, who was honored on the field for his induction into the UA Sports Hall of Honor. Adams’s never-say-die attitude and electrifying punt returns made him a fan favorite. I was told that the last punt returned for an Arkansas touchdown in Fayetteville was by Adams in 2011. So when the Hogs needed a spark on Saturday, guess where they found it?

Just four plays (including sacks by Razorbacks Drew Sanders, Jordan Domineck, and Landon Jackson) after running back Raheim “Rocket” Sanders turned a Jefferson shovel pass into a 73-yard house call, Bryce Stephens returned a punt 82 yards for another touchdown. With 9 minutes left in the game, Arkansas finally had its first lead of the night. Jefferson added a 1-yard rushing TD to seal the dramatic victory, 38-27.

Tusk to Tail has seen a whole lot of losses since Petrino exited Arkansas. Of all the coaches that followed, I am confident Pittman is the only one able to bring his team back to win that game. Beating Petrino that way seemed a fitting way to turn the page on a dark chapter of Hogs history. The figurative phoenix ascended from the ashes during that 4th quarter comeback.

They don’t ask how, they ask how many, and the #10 Razorbacks remain a perfect 3-0 heading to Dallas to face Texas A&M. I have no doubt Sam MF Pittman will have his Hogs ready to play.