Tusk to Tail: Bobby’s Bears provide a scare, but the Hogs pull it out of the ditch for a win

Arkansas won a too-close-for-comfort game Saturday (Sept. 17) against the Missouri State Bears led by former Razorback coach Bobby Petrino. A flurry of 21 points in the fourth quarter, sparked by a punt return for a touchdown, secured the win and pushed the Hogs to 3-0.

Saturday’s attendance of 74,133 is the highest-attended home game against an FCS foe in school history.

Offensive highlights included RB Raheim “Rocket” Sanders carrying the ball 22 times for 167 years, or 7.6 yards per carry. Sanders also had two catches, one with which he ran 73 yards after the catch to score a touchdown. Overall, Arkansas had 597 total yards compared with 409 total yards for Missouri State. 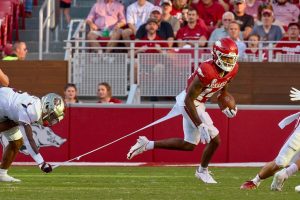 On defense, LB Drew Sanders had 12 total tackles, with 5 solo and 7 assists. DB Simeon Blair had 10 total tackles and LB Bumper Pool had 9 total tackles. DL Zach Williams would have two big sacks for a total of 15 yards lost. Arkansas finished with eight sacks. Since 1999, the eight sacks in a game ties the most by the Razorbacks (8 vs Auburn in 2012 and 8 vs Texas in 1999).

The momentum shift in the game in which the Hogs trailed for most of the first three quarter came in the fourth quarter with a 82-year punt return by Bryce Stephens. He is the first Arkansas player to return a punt for a touchdown since Nathan Parodi against UAPB in 2021. 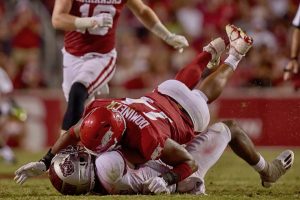 “Well, I want to congratulate Missouri State and Coach Petrino on a great game plan. He had his kids prepared more than I did. He did a wonderful job; they have a wonderful quarterback. Man did he make a lot of plays,” Razorback Head Coach Sam Pittman said after the game. “There were several different times in the game where it didn’t look like we were going to win. Our kids just kept fighting and clawing and to come out with an 11-point win, that says a lot about the culture of our program and of our kids. I’m really proud that we won the game and I’ll leave it at that.”

Following are highlights and stats from the game.
• WR Matt Landers notched his third career game with 100+ receiving yards after totaling seven receptions for 123 yards. 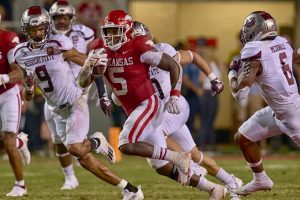 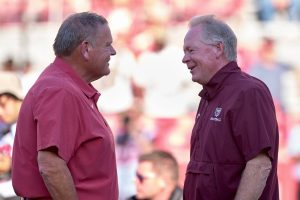 • QB K.J. Jefferson threw for a career-high 385 yards. His 19 completions and 31 attempts were season highs. In the first half, Jefferson completed 9-of-15 passes (60%) for 237 yards and a touchdown. His 237 passing yards at the half are the most he has thrown for in the first half of a game.
• Dating back to last season, Jefferson has rushed for a TD in four consecutive games. He is the first Arkansas QB to run for a TD in four games in a row since Quinn Grovey in 1988. He has thrown a TD and rished for a TD in all three games in 2022.
• Under head coach Sam Pittman, Arkansas has gained 400+ total yards of offense in 19 of 27 games, including six straight dating back to last season. Pittman also is the first Arkansas head coach since Lou Holtz (1977-78) to win his first seven games against non-conference opponents.

• LB Drew Sanders posted his second consecutive game with double digit tackles and at least 1.5 sacks after finishing with 12, inlcuding a career-high 2.5 sacks.
• DL Jordan Domineck tied his career high in sacks with 2.0. Domineck now has 13 career sacks, the most by a current Hog.
• S Saimeon Blair tallied a career-high 10 tackles, including nine solo stops.