RB Raheim “Rocket” Sanders runs for one of his three touchdowns against Ole Miss. (photo by Mark Wagner)

They say if you can’t fix it with duct tape, you’re not using enough duct tape. Yet as the morning clouds cleared before our neighbors in HogTown began to appear, Tusk to Tail already had a catastrophe on our hands. One of our flat screen TVs was attempting to free itself from this mortal coil.

Apparently the frame holding the screen and circuitry in place had cracked in transit along the last two losses to Liberty and LSU. The high def innards could no longer be contained, dangling into Craigs hands from where the set hung above. A few silver strips held us in place for a couple of hours before the disemboweled monitor finally tumbled to its demise.

Craig adjusted the remaining set, noting the TVs had survived a tenuous five-year run that began under Bret Bielema. I pointed out that with Black Friday sales starting, there has never been a better time to buy electronics.

The glass is always half full at TTT.

The last home tailgate of the year means total liquidation, or in our case, “liquor-dation.” Drain the bar until there is nothing left to store. Kara and Casey served whipped shots and hot toddies in addition to all of our standard fare. A higher proportion of brown liquor seemed to be poured this week in likely anticipation of the chilly night ahead.

When I told Kara that I had enjoyed a few cups of spiked hot apple cider, her reaction was akin to when Chong realized that Cheech had consumed their entire stash. You gotta take it easy on that stuff. It was time to mix it up. I stared at the overwhelming array of bottles behind our bar, frozen with indecision like Buridan’s donkey before eventually accepting a tutti frutti hard seltzer. 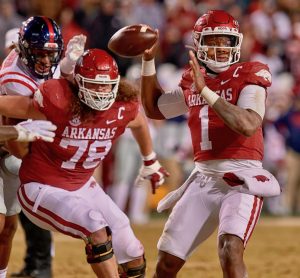 Our bountiful buffet offered five different styles of chili to warm one’s core, plus a lot more calories to burn. Chef Brad was like a kid with a new toy, grilling gigantic steak and chicken kabobs to perfection on a premium stainless steel open fire grill loaned to us by Damian Lux. The grill became a centerpiece of our gathering, as everyone enjoyed the warmth and ingenuity of the open fire pit.

The game Saturday was anticipated to be the coldest Fayetteville kickoff in more than 30 years, but the sunny afternoon remained pleasantly crisp. Our temporary walls and propane heaters allowed most guests to take off their coats and stay awhile. Dale bought our own walls after Revel XP, the company overseeing Victory Village, told us that none were available. We were the only enclosed tailgate there just last week. However, we noticed that the tent belonging to famed Arkansas alumni Jerry Jones had his own set of walls Saturday. Once again, when it comes to tailgating, TTT forces the Joneses to keep up with us. 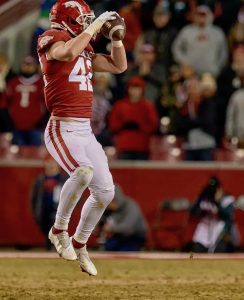 The only primetime SEC matchup of the Razorbacks’ season delivered a late arriving crowd. Jukebox took the HogTown stage to a light smattering of applause and proceeded to tear the roof off the sucker. The eclectic band’s variety of funky covers and party hits turned this mother out, eliciting varying degrees of stinkface across the Maple Street dance floor.

By mid afternoon, the crowd began to swell. More than a few of our guests were Ole Miss fans. There is a complicated duality to followers of the Rebels, Bears, and Land Sharks, both charming and mildly obnoxious, like that drunk uncle you see over the holidays. Quoting William Faulkner and Widespread Panic in equal measure, their fans proudly pledge allegiance to their Mississippi school from their mansions in Arkansas and Tennessee. Even the poorest students and alumni dress to the nines for any social event, including football games and tailgates. Even the most affluent fans tend to look like they could use a haircut. 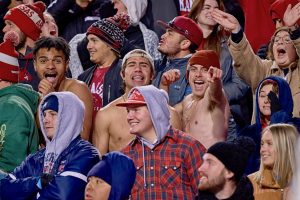 Not all Arkansas fans are sane. (photo by Mark Wagner)

Saturday was a day for the underdogs, laced with hope and silver linings. High profile matchups across the country finished in thrilling fashion. Bielema’s Illini lost a heartbreaker to Michigan while Florida fell to Vanderbilt. TCU’s playoff chances are still alive following their walkoff win over Baylor. Tennessee lost their Heisman candidate quarterback as well as any chance to reach the playoffs in their upset loss to South Carolina.

Jeb’s son Hunter, an extraordinary amateur sports analyst, told us two reasons why Arkansas could upset Ole Miss. The first key for the Hogs was the healthy return of QB1, KJ Jefferson. The second reason, Hunter explained, is that the 14th ranked Rebels just weren’t as good as most people thought. Still, I’m not sure anyone could have scripted what went down Saturday night. 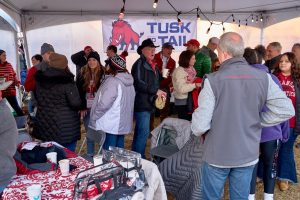 The warm Tusk to Tail tent became a home to many guests prior to the Razorback game against Ole Miss. (photo by Mark Wagner)

After scoring just 19 and 10 points the past two weeks, KJ’s return seemed to ignite the Razorbacks’ offense. Jefferson threw 8- and 23-yard touchdown passes to Matt Landers in the first quarter, following up with a 20-yard strike to Ketron Jackson in the endzone early in the second.

Then Rocket blasted off. Sophomore running back Raheim “Rocket” Sanders rushed for 232 yards and three touchdowns, including a 68-yarder on the first drive of the second half to open up a 42-6 lead in the third quarter. The rout was on. Sanders averaged 9.7 yards on 24 carries, helping Arkansas finally become bowl-eligible with one more game to be played at Missouri. 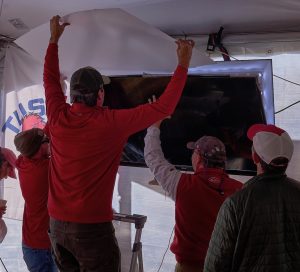 Scene from the death of a TV. (photo by Mark Wagner)

Ole Miss had their own pair of 200-yard rushers, scoring three touchdowns in the fourth quarter to make the final score somewhat respectable, 42-27. It was too little, too late, as penalties and turnovers took away any chance of Ole Miss getting back into the game. Two first half scores were taken off the board due to Rebel infractions.

Once again, the Arkansas defense played lights out. The Razorbacks had only allowed one TD over nine consecutive quarters dating back to the Liberty game before Ole Miss scored in garbage time Saturday. The Rebels had no answer for linebacker Drew Sanders, who finished with 10 tackles, an interception, a fumble recovery, and a shared tackle for loss with Eric Gregory. Sanders has recorded a tackle for loss in three straight games.

The season hasn’t always gone how Hog fans wanted, but Tusk to Tail remains grateful Arkansas will play in another bowl game. Sam Pittman is just the fourth Arkansas head coach to earn bowl eligibility in each of their first three seasons, joining Lou Holtz, Ken Hatfield, and Houston Nutt. Beating Mizzou could lead Arkansas to a better bowl, as well as preventing the Tigers from playing in the postseason.

It appears that better days could be straight ahead, but we will bring the duct tape just in case.