It was fun trip to Missouri. We wish the team had made the trip. Being the third week in November, it’s only natural that this article would have a Thanksgiving theme. However, it felt more like Christmas to the Tusk To Tail group, with presents galore.

First, the Hogs earned a gift of a third consecutive bowl invite last weekend. Our sixth victory could not have come against a better group of people. I can’t stand Ole Miss, so to see the beat down we put on them last week is so satisfying.

I went to bed Wednesday night excited for another reason. This was my first time to Columbia to watch the Hogs play at Missouri. I have been as excited as a teenager with Taylor Swift concert tickets to check this visit off my list.

What list is that you ask? Well, a fair number of Tusk To Tail members have visited every stadium in the SEC. As a relative newcomer to the tailgate group, starting just in 2015, I have been slowly but surely checking the stadiums off my list, and Missouri is number seven. 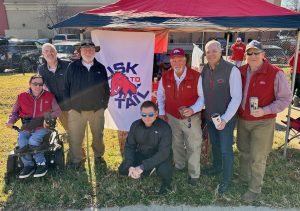 A few Tusk to Tail members and guests set up shop on the University of Missouri campus.

Some may wonder why it is such a badge of honor to visit all 13 stadiums in the conference. Because men can’t let things die, that’s why. I should be perfectly happy with visiting seven stadiums across the southeastern United States, but no, I can’t let it die. I have to see all thirteen. This is something just built into men’s DNA I guess. Just like my fraternity brothers from the early 90’s that still refer to me by my college nickname, Juice. Like Craig, who didn’t miss a single Razorback football game, home or away, for 11 years. Or those four guys who played a game of tag for 30 years across the entire country. Men just can’t let things die. 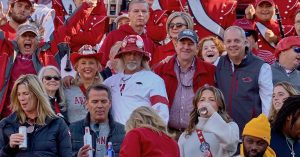 As soon as Thanksgiving overeating concluded, my son Hunter and I hit the road, about 10 minutes apart from Dale and Mark. As we traveled across Missouri, I couldn’t help but notice that there is a billboard about every eight miles to go visit a cave. Why do Missourians love caves so much? No thanks. I’ll just take your word for it that your caverns are fantastic.

We rolled into Columbia just after dark, but the power in our hotel was off (foreshadowing?), which meant we headed straight to Trumans, one of the few sports bars open in Columbia. Truman’s was pretty standard as far as sports bars go. I saw no mention of Harry Truman’s legislative accomplishments on the walls, but our 33rd president would be honored to know they proudly serve Busch Light on tap. Several other Arkansans had discovered the bar, and an obligatory Hog call was made around 8:30 p.m. Hog fans got a nice little stocking stuffer when Ole Miss fell to Mississippi State, meaning a victory on Friday could bolster our bowl destination opportunities. 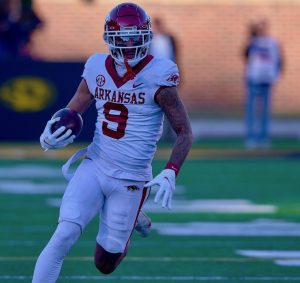 WR Jadon Haselwood runs for yards after the catch. (photo by Mark Wagner)

Friday looked to be a gorgeous day, about 55 degrees with no rain. Dale, Mark and Walt got the tailgate set up about 9 a.m. It was around 35 degrees, but it soon warmed up, and the sun made for a great travel tailgate. We ended up with about 25-30 attendees, and we pushed our remaining beverage inventory on any person who happened to walk by.

As we watched the Baylor-Texas matchup, we reminded ourselves that Missouri was KJ Jefferson’s first start in 2020. With Feleipe Franks injured, a then unknown Jefferson was up to the task, leading the Hogs to 48 points. However, our defense allowed the Tigers to drive the field in the last 43 seconds of the game, handing the Hogs a 50-48 defeat.

Faurot Field seats about 62,000, but as we found our seats, the stadium looked to be at 70% of capacity. Wikipedia says Faurot Field opened in 1926, and it showed. The concourses were cramped, and I noticed several of the lights illuminating the field were burned out. And the bathrooms? If you liked 1970’s era War Memorial bathroom troughs, then you will love 2022 Faurot Field. Of the stadiums I have visited, this was easily the worst. 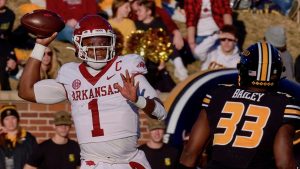 The product on the field wasn’t much better. Arkansas never looked in sync on the offensive side of the ball. Harrison Mevis, Missouri’s “thicker kicker,” started the scoring with a field goal, and the Hogs responded with a touchdown run midway through the quarter. Our defense, though, could not find an answer for Missouri quarterback Brady Cook. The absence of Bumper Pool was certainly a factor, but Cook torched the Hogs for 119 yards rushing in the first half alone. The Hogs and Tigers traded scores, and Rocket Sanders caught a pass from Jefferson to put us up 21-20 at halftime.

The offense did not appear to come out of the locker room after halftime. Our offensive line was manhandled, leading to seven sacks and several more quarterback pressures. The offensive play calling was also a headscratcher. Heading into the game, Rocket Sanders needed 98 yards to take the SEC rushing title, but inexplicably, he only had 10 carries for 47 yards.

At the end of the third quarter, the Razorbacks got the ball at midfield. Down 29-24 at that point, we seemed primed to pull ahead. After a nice drive, and a timely pass interference penalty by Missouri in the end zone, the Hogs had first and goal from the two yard line. For some reason, instead of playing power football and running Sanders or Jefferson, we snapped the ball to Trey Knox and ran a pass play, both of which failed. The Hogs settled for a field goal, making the score 29-27 Tigers.

The defense gave us chances, but each time, our offense stalled. After all of the listlessness throughout the game, the Hogs got the ball back with about 4 minutes left, with a chance to win the game, a Christmas miracle if you will. Unfortunately, there would be no great comeback, just three plays and a punt. The Hogs fell 29-27. This game can be nicely characterized as a missed opportunity, but most of my text threads labelled the effort “pathetic” and “inexcusable.” Either way, 7-5 would have had a much better ring to it than 6-6.

Our hotel was a two minute walk to the stadium, and we were just three miles from the interstate. As Mark said, “the best thing about Columbia is that it is really easy to leave town quickly after a loss,” which is unfortunately true. Since the Razorbacks and Tigers have started playing regularly, the Hogs have yet to win in Columbia.

As for me, I didn’t disclose earlier that I was 0-6 in SEC road trips. This makes it 0-7. Do you think it may be time to forgo future road trips? Absolutely not. I’ll be in Gainesville next fall. It’s the same reason Tusk To Tail has tailgated, home and away, through the John L. Smith, Bret Bielema and Chad Morris tenures. It’s the same reason we will be back next season, and the foreseeable seasons after that.

We can’t let it die.