An early photo of Razorback stadium.

Welcome to Hog Wallow: The birth of a Razorback football stadium

With two back-to-back home games and three of the first four football games of the season being played at Reynolds Razorback Stadium in Fayetteville, we’re going to take an early look at the origins of the stadium on the campus of the University of Arkansas.

For history geeks, there’s a fascinating paper written in 2015 by four LSU researchers titled, “Arkansas Football Stadia: A Push and Pull toward Modernization.” It’s impressive enough that someone from LSU conducted research, even more impressive that they used the proper plural for stadium in the title. Clearly, a UA English grad proofed the paper. We’re going to say “stadiums” though.

Football stadiums became popular in the early 1900’s for many of the same reasons that they are today. It was a way to recruit alumni gifts, generate revenue, and enhance the brand of an institution of higher learning.

They were also profitable, as the paper notes:

“College football historian Raymond Schmidt suggested confidence in college football was particularly strong during the 1920s as it ‘was believed to have an estimated drawing power of $50 million a year with well over 50 percent of that representing profit’ to cover both athletic and many other university expenses.”

Football experienced glory years in the 1920’s as the sport became more popular and a new communications technology – the radio – became widespread. Fans were whisked away in the cultural phenomenon of football, and it became a big deal to actually go to a game and experience the thrill of the sport in person.

Radio also brought ad revenue to college football. For Arkansas as part of the Southwest Conference, Humble Oil Co. was an early official radio sponsor and it shared revenue with each school. According to the researchers, it was a $3,500 per year stipend with an additional $300 per game going to a school for conference game broadcasts and $150 per game going for non-conference contests.

All of this activity led to universities with college football teams having to replace their wooden structure facilities with concrete stadiums that offered more seating, concession stands, and bathrooms.

“At the University of Arkansas, from 1901 to 1938, the Razorbacks football team played on an athletic field located atop ‘The Hill,’ an area of campus which is presently occupied by Mullins Library and the Fine Arts center. 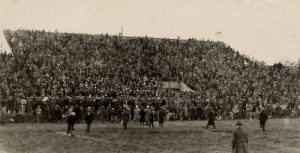 “Affectionately known as the ‘Hog Wallow,’ the athletic field and 300-seat temporary wooden bleachers were rebuilt each season costing from $200.00 to $1,900.00 after a temporary grandstand was added during the late 1920s.

“Inadequate in its early years to meet growing interest in football and evolving consumer preferences, Hog Wallow underwent a number of minor improvements annually during the 1920s under the emphasis that the University needed to match the level of facilities offered by its peers.”

Arkansas was among the last of many of the regional schools to complete a more permanent structure in part due to political wrangling for re-locating the school as well as the challenge in raising funds for such a project in a state as resource-deprived as we were.

BAILEY STADIUM
The WPA – Work Projects Administration, which was part of the economic stimulus promoted by President Franklin Roosevelt during the Great Depression – provided most of the funding for the modern stadium. The university wound up paying about 22%, according to the researchers. 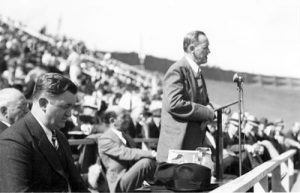 When it opened in 1938, the horseshoe-shaped stadium was named for then-Gov. Carl Bailey.

Bailey Stadium cost around $300,000 and was located on a site a little west of Hog Wallow. It seated more than 13,000 fans through 16 rows of concrete seating on the east and west sides and an additional 15 rows of steel seating. There were bathrooms, concession stands, public telephones, dressing rooms for the players, and a first aid station.

Of course, the horseshoe shape of the stadium allowed for the grassy hill for lazy watchers.

It was a little short-sighted to name the stadium for Gov. Bailey though. When he was defeated for re-election in 1940, there was a scramble to rename the football mecca, thus it became Razorback Stadium.

I love the name ‘Hog Wallow.’ Perhaps one of the tailgating areas could adopt the name, even if it’s geographically inaccurate. The designation is just too good to leave to history.

We’ll follow up on this evolution of football “stadia” in future posts, but for now, we’ve gotten you to the site of the current stadium where the Hogs hope to stomp San Jose State on Saturday.