Tusk to Tail: We’ll always have the third quarter

It is the emotional roller coaster of playing Alabama under head coach Nick Saban with any expectation of ever winning. The Crimson Tide humbled the Hogs 49-26, their 16th straight win over Arkansas. The last time the Razorbacks beat Bama was 2006, the year before Saban took over in Tuscaloosa.

Though two consecutive losses have been a jarring speed bump to a season that began with such hope and potential, spirits remained high as the weekend began. Northwest Arkansas was absolutely juiced. With the exception of last year’s Texas throwdown, there hadn’t been this kind of buzz surrounding Arkansas football in more than a decade.

Interstate 49 was a steady stream of fans funneling into town for the big game, and there wasn’t a vacant room to be found. Even the old “no tell motel” last resort motor lodges around Springdale were filled to capacity, as was just about every local restaurant and bar.

Tickets were scarce, reportedly selling for as much as $800 each before last week’s loss to Texas A&M. Student tickets were issued through a lottery system due to high demand. Several hundred students with tickets camped overnight Friday to get prime space in the general admission seating. A long row of tents snaked around the stadium to the open lawn of Bud Walton arena. 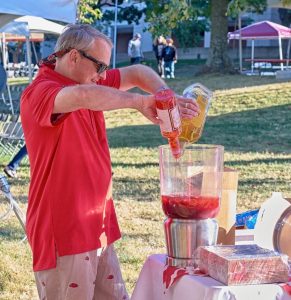 Dale and Kara’s daughter Spencer was among those who sacrificed sleep to get a better seat at the game. Spencer has become quite the superfan, traveling to Dallas last week and Starkville next Saturday to call the Hogs. Her active streak of attending consecutive games is longer than that of our Godfather of Tailgating Craig, who had previously only missed one game in 20 years.

All of our children were raised around tailgates and Razorback games. They were practically groomed to attend the University of Arkansas. Spencer and my son Jackson are juniors, and Craig’s son Lawson is a sophomore at the U of A. Rather than muddling through the lottery and camping, Jackson asked if he could sit next to me for the Bama game. His mother graciously gave him her ticket, allowing Jackson and I to sit together as we had for so many games since his childhood.

About the time Spencer and friends folded up their tent that cool autumn morning, TTT had begun unloading our gear at the Big Top in Victory Village. The campus tailgating area is managed by Revel XP, who offers turnkey tailgate options at premium prices. Unfortunately, they are tailgating rookies. As we loaded in shortly before 8 a.m, the carts Revel provides were still chained to a tree, and their staff was nowhere to be found. 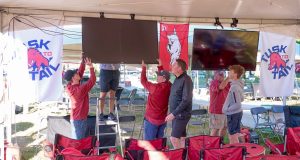 “This is how the pyramids were built,” I explained while Forrest doled out generators and our mounted wild boar’s head for others to carry by hand.

Within minutes the Tusk to Tailgate had sprung to life. Everyone is expected to elevate their game when Bama comes to town. Our tailgate crew is no exception. While I mixed up a 2-gallon batch of Razor-Ritas, Clay began to shred the 40 pounds of pork butts he had smoked for the occasion. Buffet tables were loaded with chips and dips and fruit and veggie trays. The holy trinity of catered chicken nuggets, tenders, and chicken salad were served next to the barbecue pork and beef brisket. There was an endless array of brownies, cookies, and a variety of breakfast pastries to satisfy any sweet tooth.

Simply put, it was a feast fit for tailgating royalty. We entertained well over 100 guests, and nobody went hungry. Our spread offered such an embarrassment of riches that a few random students had begun to help themselves before being shooed away like feral animals. 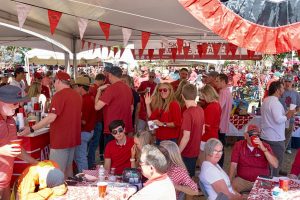 The Tusk to Tail tent attracted a big crowd. (photo by Mark Wagner)

The entire campus was overrun. We have been tailgating in the misfortunately named Victory Village since the John L. Smith era, and I recall days you could have fired a shotgun in any direction without worrying about hitting anyone. So few people used the porta-potties at the top of the hill that they almost felt like our own personal bathrooms. Not anymore.

From Arkansas Avenue to Razorback Road, Baum Walker Stadium to Dickson Street and beyond was just one giant pulsating mass of cardinal colored humanity. In addition to the 76,000 who attended the game, it seemed like at least that many came just to be near the action. Among our guests were alumni of Notre Dame and Clemson, football blue bloods who both noted that our campus was lit.

It was a big time college football atmosphere. It was the best of times.

Then the game started.

Bama’s Heisman winning quarterback, Bryce Young, passed and ran for first quarter touchdowns before a sack by Arkansas linebacker Drew Sanders forced Young to leave the game with an apparent shoulder injury. Sanders is a former teammate of Young, transferring from Alabama due to lack of playing time on such a deep, talented roster.

Enter redshirt freshman backup QB Jalen Milroe, who immediately ran and threw for two second quarter touchdowns to give the Tide a 28-0 lead. Milroe should expect future Heisman consideration based on his pedigree and performance.

The Hogs got a little momentum going just before halftime, scurrying downfield on a 75-yard scoring drive culminating in KJ Jefferson’s 6-yard touchdown pass to Ketron Jackson. As last week at Jerry World proved, momentum is one of the greatest assets in college sports. What happened during the third quarter was one of the wildest rides Razorback Stadium has seen in years.

After exchanging punts with Bama to start the second half, the Hogs went on a tear. AJ Green ran for a 13-yard score before Jake Bates executed the perfect onside kick, recovering for Arkansas. The Razorbacks then settled for a field goal. Bama was forced to punt on the following drive, but a mishandled snap was recovered on the Crimson Tide’s 3-yard line. Rocket Sanders punched it in on the next play, making the score 28-23 once the attempted 2-point conversion was stopped short.

The Razorbacks had seized momentum. The stadium was rocking, louder than the Garth Brooks concert. Hell, it was louder than a Metallica concert. Strangers hugged and high-fived fellow Hog fans after every big play. Jackson and I will remember that quarter forever.

But eventually Nick Saban and Bama are going to remind you that they are Bama. The first moment came on 3rd and 15 from their own 20 yard line when Milroe ran 77 yards to set up a Jase McClellan rushing TD. Not to be outdone, Crimson Tide RB Jahmyr Gibbs added 72- and 76-yard touchdown runs. Jefferson was knocked out of the game to complete the annihilation.

To continue quoting the classics, it was the worst of times. Hello darkness, my old friend. Gloom, despair, and agony on me.

There shouldn’t be much shame in getting thumped by a team that thumps others for a living. But a smattering of boos could be heard from the student section in response to another 3-and-out series before Arkansas took over the third quarter. Armchair quarterbacks run amok, as a few alleged fans have reportedly called for Offensive Coordinator Kendal Briles and/or Defensive Coordinator Barry Odom to be fired. Coach Sam Pittman himself said he wants to see more downfield passing mixed into the game plan.

Five games into the season, Arkansas still has a lot to play for. Eight or nine wins is still attainable. But the Razorbacks’ vulnerable secondary faces another stiff challenge as they head to Starkville to take on Mississippi State this week. And there isn’t another home game until November.

One way or another, this darkness has got to give.