Tusk to Tail: Vintage warplane flyover may have been to remind fans of last SEC win

It was Thanksgiving in Little Rock, 2019. Friends and family gratefully gathered to gorge upon feasts and football. Thousands of tailgating pilgrims overtook an old muddy golf course before Black Friday’s Missouri matchup, thankful the neo-traditional SEC pseudo rivalry had come to town.

The game will be the last real deal in the Rock for the Razorbacks until 2021. Their only 2020 appearance will be next spring’s Red White scrimmage.

A Thanksgiving tailgate at War Memorial demands overindulgence. It is even in the name. Our forefathers literally fought for your right to party. Tailgating neophytes cite The Grove at Ole Miss as the historic home for epic pre-game celebrations, but give me WMS any day of the week, and twice on a late November Friday. The Grove is like your stodgy old grandmother, resenting any relative who has differing political opinions. War Memorial is your uncle, starting a story on the back porch, finishing about six beers later.

Fair weather fans earn their name staying home for less than ideal conditions. A cold and dreary forecast, with 40-degree temps and a 50% chance of rain would clearly qualify. A 2-9 record, interim head coach, and a fifth string starting quarterback may not be suitable for all audiences either. Nevertheless, we persisted, and we were not alone along the grand tailgating grounds.

Nothing may ever match the electric atmosphere of peak Petrino-era LSU games back in the day, but don’t ever count the Hog fans completely out. Pre-game parties sprawled from Markham to 12th Street, Fair Park to University Avenue. Tailgating was quite literal, as only trucks and SUVs were able to venture through the mud.

Since the golf course is no longer a golf course, former greens and tees, once roped off and protected, were now fair game to park and party. For more than 20 years, our capital city tailgating base camp has set up in front of the 18th tee box. The level manicured surface has hosted at least a generation of children’s pickup football games. Friday, I saw three different groups circle up on the tee to shotgun beers. Admittedly, it could have been the same group shotgunning three separate rounds of beer. We are not quick to judge on the 18th tee.

At least one of the shotgun sessions was well represented by some of my large adult nephews, slamming the official beer of the Razorbacks that my brother-in-law had given us. That generation of my extended family lives all across the map, so I was seeing some of these guys for the first time in a year or more. It felt right. After all, Thanksgiving is for visiting with family, usually while drinking, right? Our family conversations have simply evolved into concise, rapid-fire 12-ounce segments. I admired their efficiency, really. 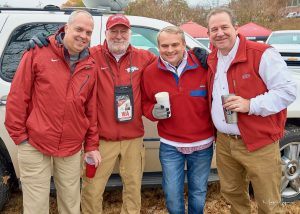 Family festivities flourished throughout our tailgate Friday. Mark’s son Zach traveled the farthest for his former hometown showdown, driving from Denver with his dog Hickston. Craig, Jason, and many others were also joined by family for the game. Including his father Jamey, three generations of Jordan’s family were there from beginning to end.

When it comes to The Thing That Everybody Wants to Talk About This Year, I am not a great conversationalist. I’ve already grown weary of the search for the sixth coach since Spring 2012. The candidates I would most like to see hired have allegedly rebuked our advances. Either we can’t afford them, or they are too smart or scared to enter the Arkansas football coaches’ meat grinder.

Everyone seems to have a theory, but the most common names I heard at our tailgate in regard to The Thing That Everybody Wants to Talk About were Iowa State’s Matt Campbell and Virginia Tech’s Justin Fuente. Florida Atlantic’s Lane Kiffin had been the hot rumor on Wednesday and had grown even hotter on Sunday before this story was submitted.

Most of our guests seemed to have talked themselves into one applicant or another, but our jaded veteran tailgaters may need more convincing, Fuente engineered Virginia Tech’s second half rally over Arkansas in the 2016 Belk Bowl, but nobody’s resume stands out as a program’s savior able to lead us from wandering the football wilderness. As I said last week, Athletic Director Hunter Yurachek should refuse to hire any coach who would have us.

Yurachek knows how important this hire is. His first major hire, men’s basketball coach Eric Musselman, can seemingly do no wrong.  But in today’s competitive SEC, ADs who make one bad football hire rarely stick around long enough to make two.

Speaking of football, it was about time to head to the old relic of a stadium. Game attendance was estimated to be around 35,000. That’s better than might have been expected, but still a smaller crowd than the annual Salt Bowl played here before Labor Day. Of course Bryant High School may very well be capable of beating this year’s breed of Razorbacks. Everyone else did, from Western Kentucky to San Jose.

There was a cool pre-game flyover by a squadron of vintage warplanes, but most of us missed their introduction, stuck in the stadium metal detector line. There are things you can count on every year at WMS. Fouling up the modes of entrance and egress is near the top of the list, just below the inevitable clock malfunction. They do sell Coca Cola here in the Rock, as well as $5 cups of beer, cash only. While cheaper than the spirits served in Fayetteville, the cups appeared to be significantly smaller, too.

The product on the field was about what you would expect. Coming into the contest, the two teams held a combined 13-game consecutive losing streak. The Hogs were led by an interim coach and 5th-string QB. At one point quarterback Jack Lindsey had thrown just two completions, both for touchdowns and an improbable 14-10 lead that eventually vaporized into a 24-14 loss. Lindsey finished 10 of 26 for 75 yards.

How bad is Arkansas football this year? Number one Alabama beat us like a drum, but dropped that week to #2, behind LSU. LSU whipped us when it was their turn, then dropped to #2 that week behind Ohio State. Missouri celebrated their win over the Razorbacks by immediately firing Head Coach Barry Odom. You do not want the stink of the Hogs on you, that’s for sure. Odom may still be in front of the stadium waiting for an Uber back to Columbia.

It was Thanksgiving in Little Rock, 2019. Tusk to Tail can certainly count our blessings. But for now, I think I am most thankful that this season is over.

Check back when the coach is hired, and we’ll probably make some bowl predictions once that’s all settled. Until then, on to Arkansas basketball.