Tusk to Tail: That game was drunk

What the hell was that? On homecoming Saturday, Sam Pittman and the Arkansas Razorbacks paid tribute to the bygone era of flat-footed detachment and disastrous incompetence that got Chad Morris fired.

The 23rd ranked Liberty Flames humbled the Hogs 21-19, handing Pittman his first ever non-conference loss. Coach began his press conference dejectedly admitting, “You saw the same thing I did: a very, very, very poor showing by us in the first half.”

Pittman gave credit to Coach Hugh Freeze, confessing that Arkansas was outcoached and outplayed by Freeze and his Flames. The disgraced former Ole Miss mastermind has been rehabbing his image at Liberty. At Jerry Falwell’s institute of higher learning, calling a few dozen prostitutes on a university phone is remarkably low upon the sex scandal totem pole.

The Flames are now 8-1, and ranked #19. Pittman pointed out that Liberty’s only loss was to #20 Wake Forest, ironically resulting from a missed 2-point play in overtime. Otherwise they would be undefeated.

Freeze has been successful throughout his career, notably beating Alabama in consecutive seasons at Ole Miss. College football pundits speculate that Freeze could be eyeing a return to the SEC. At least one writer referred to Freeze’s victory over the Hogs as his audition for the Auburn job. Freeze addressed the rumor after the game.

“I don’t know that Auburn wants me. I have no clue,” Freeze told 247Sports. “I know this: I have won everywhere I’ve been and my staff and kids have turned programs fast. It’s our culture that we instill. I know we do that and the proof is in the pudding.”

In other words, he gone. 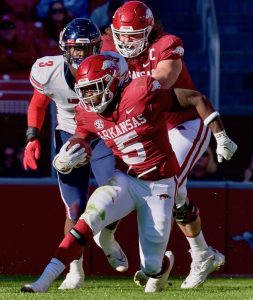 Raheim “Rocket” Sanders on one of the few runs he wasn’t tackled for a loss. (photo by Mark Wagner)

Reminding everyone how quickly you turn around broken programs is something an eager candidate says in a job interview. If Freeze planned to stay at Liberty, he had the perfect opportunity to say so. Pay no attention to the fact that Freeze just agreed to a new eight-year contract at Liberty, making him one of the highest-paid coaches in the Group of Five. All bets are off for Hugh honoring his commitments if a bigger springboard is available. Just ask Arkansas State.

Still, this is not the way the story was supposed to go. Arkansas was favored by more than two touchdowns over Liberty. Win and the Hogs would be bowl eligible, probably re-entering the Top 25 for the first time since the three-game losing streak to Texas A&M, Bama, and Mississippi State. There was plenty of motivation to win.

Everything about losing to Liberty sucks, for so many different reasons. Somewhere on that list is that Saturday felt like the perfect day, the reason Tusk to Tail gets up early on a brisk autumn morning. Severe thunderstorms began clearing out overnight, giving way to crisp, clear morning skies. 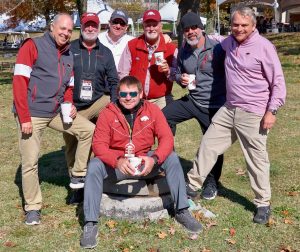 Some of the Tusk to Tail crew with smiles, which means the photo was taken before the game began.

It was a literal homecoming for the Razorbacks, their first time to play in Fayetteville in five weeks. Chris was best dressed for the occasion, wearing his late father Gordon’s classic red sport coat embroidered with a vintage Razorback patch.

In one of the quirkier season schedules that I can recall, Arkansas was playing the first of three consecutive home games following their extended leave of absence. Several season ticket holders, especially those from out of town, chose to forego this week’s game for the next two matchups against SEC rivals LSU and Ole Miss. Few tickets appeared to go unused, however, unlike previous years when Hog fans had long given up hope by this point. Attendance was announced at just over 70,000, which seems a tad generous.

Our tailgate in Victory VIllage and the surrounding HogTown street festival looked to be around two-thirds normal capacity. Most of us appreciated the extra space. Hosting fewer guests allowed time for our resident mixologists Kara and Casey to warm up with their friends in the campus bookstore. 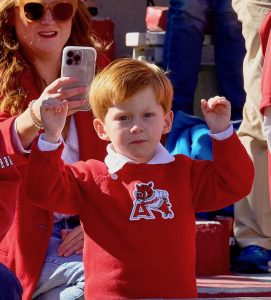 Hopefully this fan will be young enough to not remember what happened Saturday. (photo by Mark Wagner)

“I hear banjos. Time to go,” I told my wife once Arkansauce took the HogTown stage. Hog fans from every generation bobbed their heads, spun, and clapped their hands to their two sets of bluegrass standards and originals. The local four-piece string band entertained those who have grown weary of the same tired 80s covers with their timeless high lonesome sound.

The weather, the pregame atmosphere, and the pageantry of homecoming were all flawless until the stupid game started. It’s one thing to say that after losing to Alabama. But being embarrassed by Liberty ruined an otherwise perfect day. I really thought that shit was behind us.

Since taking the job following the tumultuous 2019 season, Pittman has been embraced by the Arkansas fanbase. He compensated for his lack of head coaching experience by surrounding himself with competent coordinators and assistants. The head Hog’s character, values, and genuine love for the program took care of the rest. Sam was the man.

In the other corner this weekend stood his polar opposite, an egotistical charlatan spouting bible verses between calls to hookers. For a glimpse of the man’s character, simply look at Freeze’s career trajectory. The ink is barely dry on his new contract, and old Hugh is already courting new suitors.

Recruiting scandals have followed Freeze throughout his career. Ole Miss had to vacate 33 wins achieved by fielding ineligible players enticed by impermissible benefits from Freeze and company. His first foray into coaching was at Briarcrest Christian School in Memphis. Freeze just happened to discover improbable private school athlete Michael Oher, and rode him all the way to Ole Miss after receiving coaching advice from Sandra Bullock, as documented in The Blind Side.

But they don’t ask how, they ask how many. Freeze got the W Saturday because he had his team ready to play, and quite frankly, Pittman did not. The Flames’ defensive twists and schemes shamed the heralded Hogs’ offensive line, totaling 14 tackles for losses.

“It wasn’t some new scheme,” Pitman said. “We just didn’t play well. We didn’t play inspired football in the first half.”

It was clear the players were uninspired Saturday the way it was clear they were uninspired against Missouri State in September, and against Auburn in last year’s return to Razorback Stadium following a similarly lengthy sabbatical. Someone has to answer for that. The Hogs punted on their first four possessions Saturday, lost it on downs on their fifth, then punted again and threw an interception before finally getting on the scoreboard to end the half down 21-3.

The Razorback defense stepped it up, pitching a second half shutout. Freshman defensive back Quincy McAdoo from Clarendon intercepted a pass and blocked a punt for a safety. Finding more dogs with that kind of fight will be crucial for Pittman to right the ship.

Arkansas battled back with two touchdown passes from KJ Jefferson to Trey Knox, but it was too little, too late. Jefferson failed to cross the goal line for the tying two-point attempt. KJ was reportedly banged up, unable to practice all week. So why didn’t they have Malik Hornsby, or any other QB, ready to go? Nineteen points, only 17 scored by the offense, is not enough to consistently win in this league.

Whether your coach is a nice guy or a scumbag, this kind of loss can turn a fanbase in a hurry. Some Hog fans have begun to question Pittman’s leadership, particularly following the arrest of Myles Slusher and Anthony Brown near Fayetteville’s Dickson Street late Saturday night. A promising start to the season, culminating in a Top 10 ranking, has now become a struggle to reach bowl eligibility.

Tusk to Tail still believes in Sam. How his team responds will go a long way toward defining Pittman’s legacy as coach of the Arkansas Razorbacks.