Editor’s note: Welcome to the fifth season of Tusk to Tail – the sport of tailgating as organized, performed and perfected by a group of Hog fans who have been tailgating together sober and otherwise for more than a decade. Members of the Tusk to Tail Team are Sean Casey, Jack Clark, Dale Cullins, Greg Houser, Craig May, David Rice and Mark Wagner. Tusk to Tail is managed by Talk Business & Politics against the advice of attorneys and family. The diehards may also be followed on their Facebook page. Or follow the crew on Twitter — @TuskToTail
––––––––––––––
“Thank God for Mississippi.” It’s not uncommon to hear the old adage whenever Arkansas wants to feel better about itself.

In most rankings of health, wealth, and other life quality metrics, Mississippi and Arkansas can almost always be found at the bottom of the good lists (education), and the top if it’s something you’d rather not be known for (obesity). The Magnolia State is the only one to rank worse than us in many instances.

The flagship university of both states takes their football pretty seriously. After long stretches of rebuilding that incomprehensibly included Houston Nutt at both schools, the Ole Miss Rebels turned a corner when they lured Coach Hugh Freeze away from that Jonesboro-based coaching career launchpad, Arkansas State University.

Freeze is considered an offensive mastermind, and has successfully, if not suspiciously recruited top flight talent to Oxford. Ole Miss is being investigated for multiple violations, but as long as they are not required to vacate wins by the otherwise toothless NCAA, the Freeze era will be their most successful run since a young Archie Manning was whupping up on the SEC.  The Rebels have even managed to upset Bama the past couple of  years in a row, and shot out to a 21-point lead this year against the Tide at a time when seemingly nobody else can beat them even once in a row.

Nobody but the hardest working man in tailgating, Dale Cullins, had drunk enough to believe the Razorbacks would emerge the victor Saturday. Few were confident that the Hogs could even stay within the 7.5-point spread. Of all the sports experts and analysts who made predictions across a variety of media, the only one I saw pick Arkansas was a man, so help me God, named Booger.

Though Bret Bielema’s tenure at Arkansas has also been a steadily improving arc, there were plenty of reasons to bet against the slow starting Hogs, 0-2 in conference play. Every part of our game could be questioned. But you can throw out the record when these two play. For the third consecutive year, the Razorbacks outpunched the Rebels on the scorecard, answering many of those questions along the way.

Among those questions asked before we beat Ole Miss (again):
Q: Why are our special teams not so special?
A: Nearly every team, including those acorns we played down in Little Rock, have a guy that can kick the ball through the endzone. About half of them, including Ole Miss, have a guy returning kicks like he was Jesse Owens in the 1936 Berlin games, while our would-be tacklers stand by like bewildered Nazis.

I don’t know who oversees this part of our operations, but here is how I would start off every Monday morning meeting if it were my job: “See this guy,” I’d ask, shooting the team’s track star with a laser pointer during his 10-minute youTube highlight reel. “Don’t kick it to him. Okay, who wants a doughnut? Oh, and when we get back, remind me to tell you about kicking out of bounds.”

I’m not convinced we see much consistency from these guys until we consistently see the same guys. All season long, and sometimes within the same game, the specialist spots have been a revolving door for kicker and returners alike. My assumption is that our team is not good enough to spend much time practicing special teams. Considering the number of close games lost under Bielema, this has to become an area of emphasis for the Razorbacks to reach the next level. 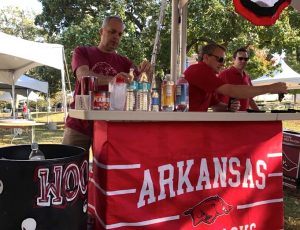 (from left) Tusk to Tail stalwarts Dale Cullins and David Rice prep the tailgate bar prior to the game in Fayetteville against Ole Miss.

That being said, special teams contributed to the winning effort. Punter Toby Baker consistently flipped the field Saturday, and who was that splitting the uprights from 43 and 36 yards out? It’s the return of Adam McFain, or as I felt compelled to yell after each kick, “McFAAAAAAAAAAAAAAAAAIN!”

Q: How will replacing key offensive starters affect the Hogs this season?
A: Obviously nobody has been questioning quarterback Austin Allen for some time. He’s the best in the SEC. He’s tough like Tyler Wilson, accurate like his brother Brandon, and has ice water veins in big moments like Matt Jones. As my friend Jason Lee said, “If I had eggs, I would want AA to fertilize them.”

But there were plenty of question marks coming into this game about the season’s other new starters. It all starts with the offensive line, which has had issues keeping Allen upright and opening lanes for running backs Rawleigh Williams III and Devwah Whaley.

Ole Miss sacked Allen three times for 25 yards, good enough for a passing grade from a bend-but-don’t-break point of view. Last week Alabama pressured or sacked our field general 39 times of the 58 plays he dropped back to pass, so hey, progress!

Meanwhile our run game was fantastic. Williams chewed up yards in chunks, grinding out a season-high 180 yards on 27 carries and a touchdown catch for the third quarter lead. Whaley tacked on another 65, but more importantly delivered the block that allowed Allen time to throw a first quarter TD to Drew Morgan. Our success in this area led to nearly a 2:1 advantage in possession time.

One running game detail that has begun to be questioned is Bielema’s and offensive coordinator Dan Enos’s reliance on the end-around play. Surely no team hands off to the wide receiver as much as Arkansas. While the play seems a tad gimmicky (and while we’re here, how about that wildcat!), Jared Cornelius used the expectation that he would continue running around the line to turn inside for the game winning touchdown. It’s an effective part of the playbook.

Q: Will the Razorbacks defense allow another mobile quarterback to look worthy of the Heisman trophy?
A: Our D has completely struggled to stop the run this season, and that was before losing our leading tackler, linebacker Dre Greenlaw. Safety Josh Liddell whiffed on three separate touchdown runs against Alabama. And let’s not forget that QB Chad Kelly basically was the Ole Miss offense in last year’s 53-52 overtime thriller, throwing for 368 yards and three TDs while running for 110 yards and another three scores. 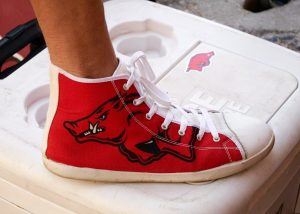 Sometimes, it is the shoes.

So how did the defense respond Saturday? With a solid return to fundamentals and swarming to the ball. Liddell led the team in tackles. Kelly managed a respectable 253 yards in the air and 89 on the ground, but was limited to just one passing and one rushing touchdown. As Kelly scrambled late in the fourth quarter, it looked as though another potential long fourth down conversion could lead to this game’s winning drive. But as Kelly approached the first down marker, safety Santos Ramirez met him violently, punching the ball backwards.

Each of the three consecutive wins over Ole Miss has come at a crucial time in it’s respective season. In 2014, winning proved that the previous week’s shutout of LSU wasn’t a fluke. Bielema ball was now on the SEC map. Last year was the improbable Hunter heave, suggesting that maybe the football Gods don’t hate Arkansas after all.

This year, the Hogs needed a win badly. We weren’t just 0-2 in the SEC, we had been run out of the building in both losses. Bielema has earned an “attaboy” for slowly building a winning culture at Arkansas. Lose one more to start the season, and all the progress and momentum could be lost. One “oh, shit” can wipe out a dozen “attaboys.”

For whatever reason, we seem to have these guys number. We didn’t play perfectly, but we came home a winner.