“Pitt Crew” Razorback fans prior to the game. (photo by Mark Wagner)

Tusk to Tail: Struggling to keep the faith as the bandwagon grinds to a halt

“That’s life, that’s what all the people say
You’re ridin’ high in April, shot down in May
But I know I’m gonna change that tune
When I’m back on top, back on top in June”
– Frank Sinatra (written by Dean Kay and Kelly Gordon)

The same conversation was held in churches, coffee shops, gyms, and group text messages all across Arkansas. It usually started with a joke, because humor helps us cope with loss. One friend commented that Coach Sam Pittman’s jukebox needed repairing while another remarked that at least we can stop worrying about our rivals hiring away Pittman’s coordinators.

“Please wait for the Razorback bandwagon to come to a complete stop before exiting the vehicle,” I replied.

After three straight wins and a Top Ten ranking kicked off the season, Pittman’s honeymoon period screeched to a halt at some point along the current three game losing skid. The Head Hog’s offensive, defensive, and special teams coordinators have all come under fire from fans.

Each loss has been uniquely agonizing. You first wish we could have that A&M game back. Arkansas was steamrolling those weirdos before a couple of “that never happens” fluky game changing moments stunned the Razorbacks. Get the win there, then maybe Alabama’s annihilation of the Hogs doesn’t sting quite so badly last week. We’re not exactly the first team to get rolled by the Tide. 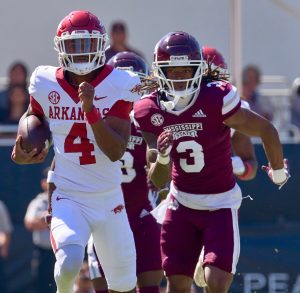 There was even a bit of a built-in excuse for losing to Mississippi State, resulting from injuries to quarterback KJ Jefferson and crucial members of the Razorbacks defensive secondary. The injuries certainly contributed to the 40-17 loss Saturday. But personnel wasn’t the only difference between the two teams trending in opposite directions. Arkansas appeared to be outmanned, outcoached, and simply outclassed by the Bulldogs in every facet of the game.

This is Mississippi State’s third season under head coach Mike Leach, who took over at the same time Pittman became coach at Arkansas. Leach’s Air Raid offense is clicking on all cylinders, led by quarterback Will Rogers, who became the SEC all-time completions leader Saturday.

The Razorbacks were still trying to figure out which backup quarterback to play, walk-on transfer Cade Fortin or speedy incumbent Malik Hornsby. The two continued to rotate, sometimes within the same series, before Hornsby eventually took over. Malik flashed downfield on designed runs and scrambles for long gains. He showed nice release on some midrange passes. Shorter routes were mayhem, a series of lawn darts chucked at the Hogs’ kneecaps. Two drives with manageable 3rd and 1 red zone opportunities were thwarted by dubious playcalling.

Defense didn’t fare much better. Arkansas has the second-highest sack total in the country, but never rushed more than three linemen Saturday. This gave Rogers ample time to find myriad open receivers. The eight Hogs in coverage were often swatted away like insects. At least four Rogers passes could have been intercepted, but whiffed through the hands of Razorback defenders. 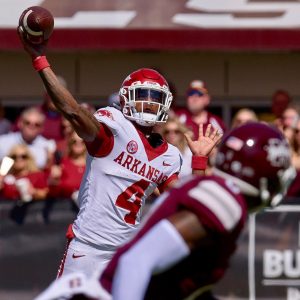 Special teams sputtered through another short punt and long return allowed. For the second consecutive week, it seemed the opponent’s average starting field position was around our previous line to gain. Then pinned deep in their own endzone, Arkansas called up former punter Reid Bauer, who immediately kicked the ball deeper than his replacement, Max Fletcher. Rotating quarterbacks at this point in the season is frustrating enough, but punter roulette is absolutely mind boggling.

Aside from Cam Little’s steady placekicking, Arkansas special teams gaffes were the norm. The Hogs opened the first half by kicking the ball out of bounds. They started the second frame by muffing the opening kickoff at the goal line.

We all saw the pathetic performance, which is why we all had the same conversation about the sad state of the Hogs. After so many years aboard the struggle bus, there is nothing new to say. Hog fans are cursed by the fate of Sisyphus, forever rolling the rock uphill before sliding back to the bottom to do it all again. Watching former Arkansas coach Bret Bielema lead Illinois to a 5-1 start to the season at the same time we are questioning our own coaching is just an added bonus.

This week the Razorbacks head to Provo, Utah, to take on BYU. Most of Tusk to Tail will be there, calling them loud. Taking a three game losing streak on the road is never ideal, especially considering the hostile home ield of the Cougars. Arkansas needs to snap the losing streak immediately. Notre Dame appeared able to push BYU around a little bit last week, so we are hoping the Hogs can assert their will against them.

As I begin packing for the trip to the mountains, the usual early season optimism has completely faded. The season is on the brink. I can’t help but be reminded of what Jason Isbell sang in “Last of my Kind:”

“Mama says God won’t give you too much to bear
Might be true in Arkansas, but I’m a long, long way from there.”

I’ve still got faith that Pittman can get the Hogs turned around. It has to start this week.