Tusk to Tail: Spiking spritzers and chatting with Yuri on the way to ‘Starkansas’

“Our true intent is all for your delight.”
– A Midsummer Night’s Dream, William Shakespeare

It is a national trend that has begun to hit home in Arkansas. Attendance at sporting events is declining. There are a variety of factors at play, not the least of which is the on-the-field performance. Opening day attendance against Portland State was 61,055. Following a loss at Ole Miss, attendance for the Colorado State game Saturday was 55,583.

Athletic Director Hunter Yurachek and his administration are all too aware of the trend, and are doing everything they can think of to get things turned around. Their primary objective appears to be improving the game day atmosphere. While HogTown was the bane of our existence for the season opener, we appreciated the school’s intent for the street festival. The last thing the tailgating elite would ever want is to deny Arkansas football fans a place to congregate, eat, and drink. Just not in my back yard, as the saying goes.

We had spoken with Associate Athletic Director Elvis Moya expressing our displeasure with loud generators and food trucks blocking our view of the stadium. Moya began right away to disperse some of the noise pollution. This week, Elvis went the extra mile to ensure that each tent in Victory Village was not inconvenienced by HogTown. Trucks were spaced more widely, and generators were moved to the opposite side of the road, drastically reducing their volume.

We could clearly hear the phonic stylings of The Mixtapes from the stage at the end of the street. It may just be coincidence, but a sizable portion of their setlist seemed to overlap with the beginner mode songs from Rock Band and Guitar Hero.

More Colorado State fans than I expected visited for the game. At one point, about a third of HogTown seemed to be wearing a forest green tee shirt or jersey. Craig invited a couple in to cool off and have a cold drink. Dale said he had met some rude CSU fans the night before, and just didn’t feel up to extending hospitality to a bunch of ungrateful hippies. I might have made part of that up.

For the third consecutive week, I was able to review another line of spiked seltzers. This week’s winner was Mighty Swell, available for years in Texas before recently entering our market. I tried two flavors, peach and a watermelon mint, and each was a refreshing change of pace during the searing hot afternoon. Some degenerates have been known to use the sparkling cocktails as mixers, adding more booze to the 5% equation. That type of behavior is not promoted by Tusk to Tail before afternoon games. 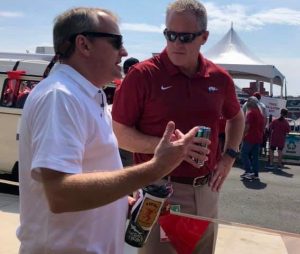 For an afternoon kickoff against a non-conference opponent, our tailgate was rocking harder than you knew a tailgate could. Even Yurachek stopped by. I went to tell him how much we appreciate what he’s brought to the program, and you could really tell he was excited to talk to a bunch of guys holding stadium cups full of liquor. In all seriousness, Yuri’s predecessor would have been shuttled by golf cart from one major donor to the next, so I applaud our AD for getting out and rubbing elbows with the people of HogTown.

Fan friendly celebrations progressed throughout the day, culminating in the team’s Hog Walk and a flyover by some squadron or another.

Oh, and there was a game.

The Hogs pulled away late to buck the Rams 55-34 in a game that had been tied at 34 just a few moments earlier. Quarterback Nick Starkel, making his first start as a Razorback, threw for 305 yards and 3 touchdowns, causing many to wonder how he ever trailed Ben Hicks on the depth chart. It was later reported that Starkel had missed some practice time before the first game to attend the funeral of a close friend lost to leukemia, putting him behind in important game week prep.

Whatever the case, the team clearly belongs to Starkel now. I’ve seen him anointed “Starchild,” an ironic nod to Paul Stanley’s KISS persona for our Bieber loving pocket passer. “Starkansas,” offered Forrest, while keeping an eye on our bar during the game.

Under Starkel, the Hogs should continue to take a step forward. Perhaps as soon as this Saturday, they will play a complete game where the outcome is never in doubt. Against Colorado State, there was doubt from the second play from scrimmage. The entire Arkansas defense was within a couple yards of the line of scrimmage, which I’m sure seemed like a good place for a football player to be until Rams running back Marvin Kinsey Jr. burst through the line to leave the Hogs standing flat footed. We were down 7-0, and I hadn’t even finished my last drink, poured in a plastic go cup to be enjoyed all the way up to the gate of the stadium.

Arkansas struck back just five plays later when Starkel tossed a 24-yard touchdown pass up high to big freshman receiver Trey Knox. Knox finished the game with six catches for 90 yards, while fellow freak freshman Treylon Burks caught 4 for 92. They are beginning to develop chemistry with the star QB.

Likewise, the tIght ends are becoming an effective weapon again. Chase Harrell had swatted down Hicks’ passes like they were giant mosquitos in the season opener against Portland State, but had no problem hauling in Starkel’s 14-yard touchdown toss. Cheyenne O’Grady broke at least five tackles to score a 62-yard touchdown in a highlight that will rank up there with Joe Adams punt returns and Darren McFadden runs. The running game, led by Rakeem Boyd (20 carries for 122 yards, 2 TDs) and Devwah Whaley (9 for 81, 1TD) remains a vital part of Coach Chad Morris’s offense.

Fifty-five points later, It’s beginning to feel like the offense is moving into Morris’ fabled left lane. We’re going below the speed limit and our blinker has been on the past three miles, but we are entering that left lane.

The defense, so valiant when the offense failed to sustain drives in the first two games, struggled to hold serve on Saturday against the Rams. Colorado State QB Collin Hill left the game with an injury early in the second half, limiting the Rams’ ability to keep up with the Hogs in the 4th quarter. While it was quite possibly the difference between a win and a loss Saturday, it is probably unrealistic to count on knocking out every team’s starting quarterback.

The SEC quarterbacks we face should be much better than Hill. We are going to need to score points in bunches. To have a chance of keeping up with the Kellen Monds and Tua Tagovailoas, we are going to have to put that hammer down. It’s time to take this offense to Starkansas.

But first, on to San Jose State.