Tusk to Tail members and guests enjoy a short tailgate prior to the game at Jerry’s World in Arlington. (photo by Mark Wagner)

Tusk to Tail: Sometimes it does hurt so good

Following three straight thrilling victories in Fayetteville, the Razorbacks headed to Dallas to play Texas A&M Saturday. The Top 25 matchup was the first road trip of the season for both teams.

AT&T Stadium is the official name for the colossal arena that Dallas Cowboys owner Jerry Jones built, but it is often called Jerry World, Six Flags Over Jerry, or where Cowboys fans’ dreams go to die. Like everything else around Dallas, it is bigger, flashier, and costs a hell of a lot more than anything you can get back home.

Dale, the mastermind of our tailgating empire, recently aired his grievances concerning the neutral site of the annual Southwest Classic. Admittedly, after you’ve experienced Jerry’s football megachurch once, the novelty wears off pretty quickly. The enormo-dome actually comes off as rather stale and sterile when compared to a lively SEC stadium nestled among a picturesque college campus.

It’s all a matter of perspective. As Rebecca and I sat outside the Cowboys stadium entrance, we saw an endless parade of spirited fans gleefully gathering for the evening’s high stakes showdown. It seemed obvious that there was no place the 64,000 Hog fans and Aggie supporters would rather be in that moment than right there.

There were plenty of old-timers and other people around our age, but a considerable portion of the fanbase appeared to be students or recent college graduates. One factor that potentially skewed the younger audience is the growing number of students from the surrounding area. Of course the Aggies draw heavily from their home state of Texas, but lately so has Arkansas. About a quarter of UA students hail from the Lone Star state these days, trailing only Arkansas in UA enrollment.

The young folks at Jerry World came dressed for the occasion. A large percentage of Texas A&M students wore the corps of cadets khaki service uniform. Other guys wore 12th Man jerseys or school branded fishing shirts. Nearly everyone drank from red plastic cups or straight from aluminum beer bottles while waiting to pass through the gates. 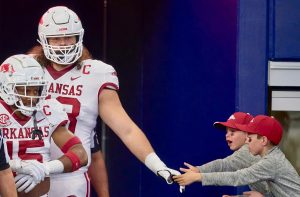 Young Razorback fans connect with players as they enter the field. (photo by Mark Wagner)

Young ladies from both schools seemed fond of gameday fashion by Queen of Sparkles. Many of the coeds’ outfits were as revealing as the clear bags and purses slung across their shoulders. Short skirts and high white cowboy boots were the unofficial uniform of Arkansas sorority girls. Several gals wore tops designed to expose cleavage and plenty of sideboob. It felt like I saw more breasts and skin than a quality inspector at a Tyson chicken plant.

Dale put together a modest tailgate in Lot 4 across from the stadium. Chef Brad, who lives in the Dallas Metroplex, helped set up two 10-foot tents with Sam and Mark, who drove from central Arkansas early that morning. They were joined by a couple of friends who drove down from Fayetteville with their teenage sons. Portable generators powered a flatscreen TV and four electric fans to circulate the stifling Texas air.

To discourage all-day tailgating, AT&T Stadium does not open its parking lots until just a few hours before game time. Tusk to Tail generally considers that another drawback compared to a campus stadium, but the policy made more sense as the afternoon temperatures approached triple digits Saturday. The gang spent the early afternoon posted up at a nearby sports bar, watching Auburn and Missouri bumble and punt. Neither team seemed capable of winning, but Auburn escaped with a less-than-classic overtime victory.

Both Auburn and Mizzou have continued to struggle while Pittman has the Hogs on a solid upward trajectory. It has been a pleasure watching the two coaches twist in the wind. Most college football experts anticipate Harsin’s termination at some point this season, but the shine has started to come off Eli’s apple as well.

“If Drink ends up being fired before Harsin, that’ll be quite the accomplishment,” Jeff texted once the game mercifully ended.

The afternoon games offered a glimpse of the topsy turvy world of college football in the days of the transfer portal and lucrative NIL deals for student athletes. Texas was upset by Texas Tech, eliciting cheers from Hog fans and Aggies alike. Miami, a team that A&M barely beat last week, was destroyed by Middle Tennessee freaking State. Oklahoma was upset by Kansas State, who may have been looking ahead to the Sooners last weekend, when they were upset by Tulane themselves.

If there was any reason to worry, the Razorbacks didn’t show it. Arkansas burst out of the gates looking sharp and confident in their rarely seen white uniforms and helmets, reserved for the special occasion. The Hogs imposed their will upon the flacid Aggies, pounding them with a five-headed rushing attack that saw the return of junior running back Dominique Johnson. Johnson had been recovering from offseason arthroscopic surgery.

When the Aggies tried loading the box to defend the run, quarterback KJ Jefferson flicked 32- and 56-yard touchdown passes to Ketron Jackson and Warren Thompson respectively. Arkansas raced to a 14-0 first quarter lead.

Throughout Dallas and the rest of the civilized world, the word “cute” is typically considered a compliment. For example, most of the sorority girls in mini-skirts and titty shirts looked pretty cute. But you never want to hear that word used to describe your team’s playcalling.

Arkansas offensive coordinator Kendal Briles is the driving force behind the Razorbacks offensive firepower, but he has taken his share of criticism. Briles has been trying to work speedy backup quarterback Malik Hornsby into the game plan with varying success. At a time when the Hogs were absolutely running the Aggies over, many felt Briles’s play calling got too cute. Three consecutive failed plays intended for Hornsby led to an Arkansas punt in the 2nd quarter. A&M drove 93 yards for a touchdown to pull within 14-7.

“Maybe just put Hornsby in the slot, have him take a step back on the snap, and throw it to him,” Chris suggested. “Why does it always have to be a double reverse flipback catastrophe to get the guy the ball?”

Arkansas appeared to get back on track during the next drive, advancing to the Aggie 3-yard line before all hell broke loose. I don’t know if Briles played a role in Jefferson attempting to dive for the goal line from three yards out, but it was clearly a bad idea. The ball came loose and was returned 97 yards for a Texas A&M touchdown. The botched extra point was the only thing keeping the play from being a 14-point turnaround for the Aggies.

Momentum swung to the other sideline as A&M scored 23 unanswered points, dominating the 3rd quarter. But Jefferson’s rushing touchdown with ten minutes left in the game breathed new life into the Razorbacks. The Aggies clung to a 23-21 lead.

“We’ve scored two TDs on offense, which is about our limit,” a nearby Aggie fan said before Arkansas started its final drive. “How good is your kicker?”

I explained that Cam Little had been a Freshman All American, in part for the 46 yarder he kicked against A&M here last year. On 2nd and 5 from the A&M 16-yard line, it looked like Arkansas had this one in the bag. A bad snap resulted in a 9-yard loss, but the Hogs remained well within Little’s range.

Instead, Little’s 42-yard attempt doinked off the top of the upright. No good. Game over. Aggies win.

They don’t ask how, they ask how many, and this was Pittman’s first loss of the 2022 season. It was Pittman’s 12th loss overall since taking over as Head Hog, but this one felt different. This one hurt, as evidenced by Little sobbing uncontrollably on the sideline as the clock ticked down to all zeroes.

This might sound crazy, but I think the pain is an encouraging sign. Tusk to Tail was in the stands for a whole lot of losses before Pittman was hired. We winced when John L. Smith told us to “Smile.” We began to retreat when Bret Bielema continually said, “We’re close.” And we had just about checked out while Chad Morris played QB roulette.

The losses didn’t hurt anymore, they just piled up, one after another. We had grown numb to it all.

In just over two seasons, Pittman has Arkansas fans expecting to beat other Top 25 teams again. The loss hurts, but it was one game out of twelve. The #20 Razorbacks will just have to get it back next week against Alabama.