Marty Smith and Ryan McGee from SEC Nation (somewhere near the middle) posing Saturday (Sept. 3) with just a few of the Tusk to Tail crew and their guests.

Tusk to Tail: Marty, McGee, many mixers, and a little ‘Bearcat Beatdown’

Arkansas Razorback football is back, and anticipation is as high as it’s been in more than a decade. The atmosphere surrounding Saturday’s 31-24 victory over #23 Cincinnati was absolutely intoxicating.

When the men of Tusk to Tail unloaded our tailgate trailer around 8 a.m., Victory Village and our neighbors at HogTown had already begun to show signs of life. The crew from REVELxp scurried from tent to tent setting up tables, chairs, coolers, and satellite televisions across the campus tailgating grounds.

Despite a 9-month layoff since our last party, TTT was humming like a well-oiled machine. Within minutes, tables were adorned with linens and an array of scrumptious treats. Our officially licensed Arkansas Razorbacks bar was erected and stocked. Bales of straw were spread across the ground to absorb some of the recent rainfall. Dale’s carefully curated gameday playlist blared from a large portable speaker while ESPN College Gameday and SEC Nation aired on our flatscreen TVs. 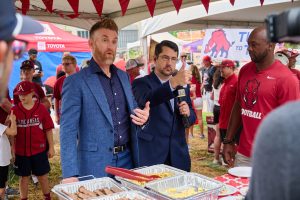 Marty Smith and Ryan McGee from SEC Nation film a segment in the Tusk to Tail tent prior to Saturday’s (Sept. 3) game. (photo by Mark Wagner)

We were expecting VIP guests at any moment. Marty Smith and Ryan McGee, known as Marty and McGee on the SEC Network, were filming a segment on Arkansas tailgating, and naturally chose to feature us. They brought former Razorback and current Food Network star Eddie Jackson to our tent for commentary.

Smith told us that they usually show up just a few minutes before taping begins, but they had a full 45 minutes to hang out with us on Saturday. Both Marty and McGee were as humble and genuinely likable in real life as they are on TV. They spent all of their free time posing for pictures and visiting with fans. For the SEC Network segment, they sampled Chef Brad’s “Bearcat Beatdown Brisket Tacos” and washed it down with our signature John Daly cocktail before joining our group for a boisterous Hog call. 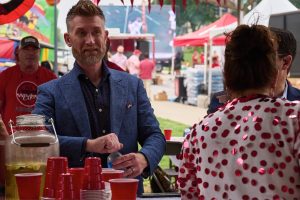 Earlier in the week, Arkansas head coach Sam Pittman made headlines by saying he didn’t know what to expect from CIncinnati, who had lost several key players and coaches from last year’s College Football Playoff team.

Tusk to Tail brings liquor and iced tea, plus a whole lot more, to our weekly gatherings. We blend sweet tea vodka and lemonade to make a John Daly. The boozy take on an Arnold Palmer was named to pay tribute to the beloved former Razorback golfer. Fittingly, Daly himself was featured on the SEC Network following our segment shortly after 10 am.

Daly was not alone, as we served gallons of his namesake cocktail to our thirsty guests before game time. My wife sipped on a Bloody Mary while I tried a tequila Ranch Water. Premium Brands donated several cases of Lost 40 beer and Punchy seltzers because an Arkansas tailgate needs real Arkansas beer. Tusk to Tail doesn’t have a drinking problem. We have drinking solutions.

As the first games kicked off at 11 a.m., the entire campus was buzzing with energy. Bid day festivities were in full swing along fraternity row, as shiny faced young men strutted by in their new pledge tee shirts. Boom Kinetic belted out 80s hits from the HogTown stage. A sea of humanity drinking from red plastic cups stretched as far as the eye could see. It was a stark contrast to previous losing seasons when you could practically fire a shotgun without risk of hitting anyone. Everyone loves a winner. 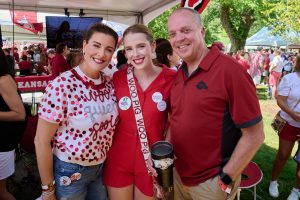 At one point, Brad got a text from Darren McFadden. Brad did some work for the all star running back in Dallas, and asked him to stop by our tailgate. I never saw McFadden, but I’m not sure we could have handled any more star power. We would never be able to top that, short of inviting the Rolling Stones.

Our tailgating tents offer 800 square feet of shaded sanctuary, but frankly it’s not enough. If the 20 contributing TTT members each invite 4 guests, that means 100 people show up to party. If each of those guests have another friend stop by, we are now up to 200 revelers. It doesn’t take long for our tents to become overrun. Despite our best planning, we ran out of cups, plates, ice, liquor, and just about anything else that wasn’t nailed down. Our guests began getting restless. What began as a celebration of peace, love, and football was starting to resemble Woodstock ‘99. Thankfully it was game time.

As we marched toward the stadium, it became evident that Cincinnati fans travel well for their team. We saw more Bearcat fans than I expect to see from South Carolina next week. I greeted each of their fans I encountered, welcoming them to Fayetteville the way TTT has been welcomed to so many SEC campuses by opposing fans. Most of them ignored me, silently glaring back in contempt. They had no use for my southern hospitality. Then again, what can you expect from a fanbase known for mixing cinnamon and spaghetti with their chili? Clearly nothing is sacred. 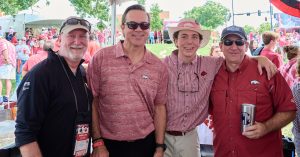 (from left) Mark Wagner, Chris May, Lawson May, and Craig May

The game went about as expected. It was an old fashioned rockfight, a hard nosed physical battle between two aggressive teams. The Bearcats showed some growing pains breaking in a new quarterback. Senior Ben Bryant threw a pair of touchdown passes, but was also responsible for a couple of turnovers.

There were plenty of new faces on the Arkansas sideline, as well. Several of the newcomers from the transfer portal made an immediate impact. Dwight “Nudie” McGlothern from LSU had an interception and long return to set up the Hogs’ first score. Oklahoma transfer wide receiver Jadon Haselwood caught a touchdown pass. Jordan Domineck, a senior defensive lineman from Georgia Tech, recovered two fumbles, one of which he forced while sacking Bryant. Alabama transfer linebacker Drew Sanders added another sack for good measure.

The Arkansas secondary gave some cause for concern, especially after losing defensive backs Myles Slusher and All American safety Jalen Catalon to injury. Cincinnati’s first touchdown came immediately after Catalon left the game. There were a few plays that could have been disastrous for the Hogs if Bryant had connected with his open receiver.

The Razorbacks’ first priority on defense seemed to be controlling CIncinnati’s run game. Playing single coverage deep may have left the Hogs susceptible, but they only allowed the Bearcats 3.6 yards per carry.

When the game is on the line, you want the ball in the hands of your best players.That starts with QB1, junior quarterback KJ Jefferson. Jefferson threw for 223 yards and three touchdowns and ran for another 62 yards and a score to lead No. 19 Arkansas to victory. The Bearcats literally could not stop him from running out the final five minutes of play.

“Seems to me like when the game gets a little tighter, a little closer, when he’s really got to take over the game, he’s got the knack to do it,” Pittman said after the game. “Most every time we need him to win the game, he makes some kind of play.”

Asked if he would celebrate the win with iced tea or liquor, Pittman replied, “I’m not promoting it, but I like some old cold beer. I think I’m going to have one.”

Good idea, Coach. If you ever want to come join us in Victory Village for a cold one, I’m sure we could make room for one more.