Ice was on the field goals at Donald W. Reynolds Razorback Stadium on Saturday (Nov. 12) prior to the game against LSU. (photo by Mark Wagner)

Veteran’s Day combined with Dad’s Weekend for several Greek organizations led to an early departure for gamebound travelers. Saturday’s 11 a.m. kickoff against an old SEC rival and a basketball game Friday evening added extra incentive for fans to beat the arctic blast into Northwest Arkansas. The interstates were abuzz as we pulled into town Friday afternoon.

Dale and Sam were already at the tailgate tents, battening down the hatches. If you’ve spent much time outdoors, you know that wind plays more of a factor than temperature. Dale finally gave up trying to teach RevelXP how to set up a tailgate, and ordered Tusk to Tail’s own set of vinyl tarps to block the wind and retain whatever heat we could generate from a series of propane space heaters. We were the only tent in Victory Village to have walls.

Dad’s Weekend started with Craig, Dale, and I meeting our kids at Walk On’s before going to the basketball game together. Referring to our twenty-somethings as “kids” is already starting to feel weird, but Jackson, Spencer, and Lawson were practically destined to attend the UA. When asked by his fourth grade teacher what made each student unique, my son replied he had been to every stadium in the SEC West.

My boy continues to make me proud. Before dinner, Jackson told me he had decided to pursue a finance minor, and followed it up by making us some money. Someone asked what the point spread was for basketball, and I just so happened to have an app on my phone that told me it was Arkansas -19.5. That app also just happened to tell me that there was a promotional guarantee on any college basketball parlay. 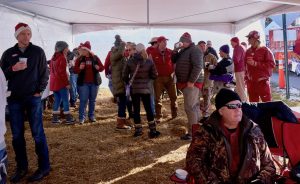 Tusk to Tail members and guests try to stay warm in the Tusk to Tail tent. (photo by Mark Wagner)

“It’s free money,” I explained to the non-degenerates at our table.

I wasn’t as confident the Hogs could win by 20 with injuries to Nick Smith, Jr. and several key contributors from Monday’s win over North Dakota State. Besides, the last thing you want is to be upset if we only won by 19. Arkansas money line was the safe play, but I needed another bet for the parlay. Jackson glanced around the sports bar’s screens.

“Gonzaga is playing Michigan State on an aircraft carrier,” he said. “Bet the under.”

Broadcast live from San Diego this year, the game has become a Veteran’s Day tradition. The sun was setting across the mammoth vessel’s makeshift court on most of the monitors around us. Jackson explained that playing in wind and sunlight was bound to affect the players. Less points should be scored when diving for a loose ball could lead to man overboard. The bet won with ease, restoring my faith in the value of a college education. 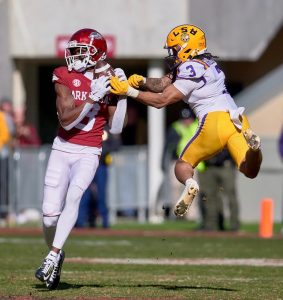 A Razorback and Tiger battle for the ball. (photo by Mark Wagner)

We should have laid the points. Despite missing most shots beyond five feet from the basket, the Hogs dominated the paint to beat Fordham 74-48. Seeing these guys live, the thing that stands out most is their length. Freshman forward Jordan Walsh looks like he was created for a video game. Their significant size advantage at every position allowed the Razorbacks to force 30 turnovers and effectively erase the Rams’ leading scorer.

Still, ball don’t lie. A five star rating and floppy mop of hair won’t mean a thing when another janky looking shot rims out. Smith’s smooth stroke should be welcome once he is able to return.

Northwest Arkansas greeted her Cajun visitors Saturday morning with a fresh light blanket of snow. Lawns and rooftops were beautifully frosted across the area, leaving streets and sidewalks clear. 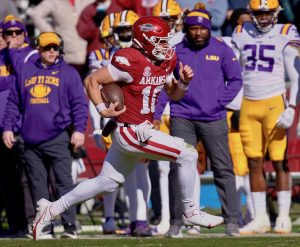 Several of us had been to some snowy games back in the 90s, but this was our first time to tailgate in the stuff. Nevertheless, Tusk to Tail remains more dependable than the postal service. Our mobile party was unloaded and assembled by the time stadium traffic was blocked off at 7 a.m. As our tent warmed to somewhere around the low 50s, melting snow streamed down along the roof and walls. It looked like we were shooting a music video.

Perhaps the greatest advantage to an early kickoff is serving breakfast food. Our buffet was loaded with an array of steaming treats Saturday morning. A variety of hot beverages were served, including a crock of apple cider mulling in booze. Various cordials and liqueurs helped the coffee and cocoa hit a little hotter. A bucket of miniature Fireball bottles was charitably offered, as was a pile of hand and foot warming packets. A large crowd huddled around our bar and buffet tables. If not for the early kickoff, the Big Top would have been overflowing. 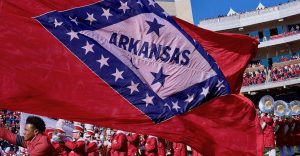 Although Baton Rouge to Fayetteville is a long desolate drive, Tiger fans tend to travel pretty well. Obnoxious clusters of purple-clad fans began foraging the campus for corn dogs and whiskey. Playing on the road reduces most of the Tiger Bait chants to random calls of “Go Tigers” in solidarity, but we have found that it’s best not to engage with the bloodthirsty savages.

It was reported that Malik Hornsby would be starting in place of injured quarterback KJ Jefferson. Super senior offensive tackle Dalton Wagner was also out. Hornsby and the Hogs would need to show a sense of urgency to put last week’s lackluster loss to Liberty behind them.

The Razorbacks defense played their guts out, beginning with defensive back Latavious Brini intercepting LSU QB Jayden Daniels and recovering a Daniels fumble in the first quarter. Arkansas was unable to capitalize on the turnovers, coming up empty after electing to forgo a chip shot field goal. The Hogs clung to a 3-0 lead before LSU moved ahead on two second quarter field goals. The Tigers led 13-3 following Josh WIlliams 1-yard touchdown run in the third quarter.

When a team is struggling, few players are as popular as the backup quarterback. Fans were miffed that Coach Sam Pittman and offensive coordinator Kendal Briles continued to ride Jefferson last week when he was so obviously banged up. We had seen a few flashes of brilliance by Hornsby in the past. Might as well see what he can do for an entire game. Malik did not appear to be up for the task, consistently taken down from behind while offering no downfield passing threat. A fourth down stumble sealed Hornsby’s fate. Time to take a look at the backup’s backup, South Florida graduate transfer Cade Fortin.

Unlike Hornsby, Fortin was able to throw the ball downfield, even if most attempts got him absolutely walloped by LSU freshman linebacker Harold Perkins Jr. and other Tigers defenders. In the 4th quarter, Fortin delivered a 40 yard Hail Mary to receiver Matt Landers, who seemed as shocked as anyone by the touchdown catch that pulled Arkansas within 13-10.

Perkins continued to harass the Hogs, finishing with two forced fumbles, four sacks and eight tackles. We will be happy to see that guy move on to the NFL.

The Razorbacks defense continued to play well, racking up 7 sacks and allowing just 284 yards of total offense, the fewest by an Arkansas opponent this season. LBs Drew Sanders and Bumper Pool made one big play after another, holding a potent Tigers offense to just 13 points despite good field position.

Unfortunately, it wasn’t quite enough. The officials announced that a video review upheld their call for an LSU first down despite clear evidence to the contrary. Fortin’s final pass attempt during contact was ruled a fumble, effectively ending the game. The crowd booed the controversial calls, but they couldn’t have been entirely unexpected. Getting screwed by the officials has become as routine as an old married couple’s love life.

The loss gave The Golden Boot back to LSU, leaving Arkansas 0-2 in trophy games this year. The season finale against Missouri could be a battle for bowl eligibility as well as the final chance to bring home some hardware. Mark offered some perspective after the game, noting that only 8 points separated Arkansas from an 8-2 record. Craig wasn’t buying it.

“Not having a backup QB ready is going to play a role in five games this season, all five probably losses,” Craig concluded. “I’m not ready to give up on the staff, but limping into Pittman Season 4 is not the way to keep folks happy.”

Seasons change overnight in Fayetteville. Pittman and company better find a way to right the ship before Hog fans turn their attention to basketball.