Tusk to Tail: Let the hate, and the Jello shots, flow through you

In “Return of the Jedi,” Emperor Palpatine tries to sway Luke Skywalker to the Dark Side of the Force. While imploring Skywalker to strike down his father, Darth Vader, Palpatine tells Skywalker to “let the hate flow through you.”

This is how Arkansas fans felt as the eight-team field for the College World Series began to take shape last weekend. There is so much hatred for so many of our potential opponents, it’s hard to focus on one hated team over the other.

Of course, every Arkansan has grown up despising Texas. It’s almost instinctual in nature. We breathe, we blink, we hate Texas. I am 51 years old, and I can’t remember a time when I didn’t hate the Longhorns. Since the Hogs switched conferences, we don’t see Texas that often in athletic competition. But trust me the hate is still there, as we saw last fall when fans stormed the football field after beating the Longhorns.

Since Arkansas joined the SEC, I would venture to say most of us hate Ole Miss the most, for no other reason than they are one of the most arrogant fan bases in the country, with zero titles to show for it. To be honest, it’s baffling to me. Not only do we have to deal with the Rebels in this year’s tournament, we fellow SEC West members Auburn and Texas A&M also made the trip to Nebraska.

Speaking of these schools, maybe I should assume that imitation is the sincerest form of flattery. We have been the OmaHogs for several years now, a nickname that naturally evolved from “Omaha.” Early last week, I saw “Olemaha” pop up on social media. The Ole Miss slogan wasn’t good, but wasn’t terrible. Auburn’s “OmAUha” fit about as well as first baseman Sonny DiChiara’s skinny jeans. Finally, the Aggies announced “Texas A & OMaha,” a slogan so bad it is laughable. To paraphrase Regina George from Mean Girls, “Stop trying to make Texas A & OMaha happen. It’s not going to happen.” On a side note, I hope I am the first person to include a Mean Girls reference in a sports article.

Finally, you have Notre Dame.

Does anybody NOT dislike Notre Dame? To be clear, we all cheered during the super regionals for Notre Dame to beat Tony Vitello’s showboating, cape wearing Volunteers. As soon as the Notre Dame victory was in the books, TTT member Michael texted, “now that Notre Dame has beaten Tennessee, please return to your regularly scheduled programming of hating Notre Dame.”

As Friday arrived, and I looked at the slate of games, I texted the group and said “I don’t want anybody to win a college baseball game today.” Yes, the hate flows through me.

With the Hogs making their third trip in four years, TTT is becoming familiar with traveling to Omaha. We began making preliminary preparations early in the week, trying to determine who was able to make the trip and who was out. Chad lamented he was on vacation out of the country and was not going to be able to go to Omaha. I made a point to remind him of a cardinal rule of being a Razorback fan. You don’t plan a wedding during a home football weekend, and you don’t take your vacation the last two weeks of June. It’s that simple.

Some traveled to Omaha Friday. Due to work obligations, Dale and I traveled to Kansas City Friday with our crew, to allow time for taking in the scene prior to the 1 p.m. first pitch Saturday. We set our alarms for 6:15 a.m., but I woke up promptly at 6 a.m. to do what everyone my age does before starting the day, play Wordle. I’m not sure how guessing a five-letter word (cacao, really?) gives one a sense of accomplishment, but that’s where I am in life.

We got our caffeine, hit the road and drove nonstop to Omaha, arriving by 10 am..  We dropped our bags at the hotel, consolidated cars, and headed over to Rocco’s Pizza and Cantina, a bar across the street from Charles Schwab field, which appeared to be the place to be for Hog fans. Oh my, were we correct.

If you have been living under a rock for the past week, Rocco’s has a little Jell-O shot contest that has taken the competition between CWS fanbases to a ridiculous new level. For reference, last year, by the end of the tournament, Mississippi State fans had purchased 2,968 shots to win the contest. 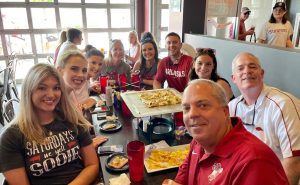 Some of the Tusk to Tail crew settled in at Rocco’s in Omaha.

Tusk to Tail was able to grab the last table in the bar, and our table of 10 sat down at 10:40 a.m.  The first hog call in Rocco’s was at 10:45 a.m. The first round of shots was purchased by our table 10:55 a.m., brunch shots if you will.  TTT was determined to do our part to help win the shot challenge. To assist in the effort, Chad offered to Venmo our table mates for a round of shots, as did several other fans following the competition on Twitter.

After the third round of shots, Forrest declared, “livers are temporary, but the Razorbacks are forever!” Around 11:30 a.m., about 20 Ole Miss fans started up a Hotty Toddy chant, but that was interrupted mid cheer by what I would say was the tenth Hog call of the morning. The one table of Stanford fans were speechless. Rocco’s was electric, and it wasn’t even noon.

Our table ended up purchasing fifty shots, which we felt was a solid contribution to the effort. If nothing else, our table was singlehandedly beating Stanford by the time we left for the game. At the time of this writing, Razorback fans had purchased 3,416 Jell-O shots, surpassing last year’s record by 500, and we have just played one game in Omaha. I like our chances.

As our group left Rocco’s, we came face to face to with the brutal heat. It was hotter than two rats having sex in a wool sock. Hog fans are no strangers to late June heat, however, and a phenomenal crowd showed up to support the OmaHogs.

On the field, the Hogs were as hot as the heat index. Our hitters seemed to make contact off of Stanford’s ace Alex Williams from the start. Braydon Webb started the first inning by nailing a leadoff double off of the Pac-12 Pitcher of the Year, and the rest of the team followed suit. By the end of the day, every member of the lineup had at least two hits.

Connor Noland threw a remarkable game. After giving up a solo home run in the first, Noland delivered the most efficient pitching performance I can remember in years, only needing 79 pitches to keep Stanford to just one run over 7 2/3 innings. The defense, which has been the Hogs’ forte all year, made countless spectacular plays in support of Noland, and made the plays look routine.

Stanford kept Arkansas from scoring for the first few innings, but Chris Lanzilli smashed a three-run homer in the top of the 5th inning to make it 4-1, which would be enough to win the game. The Razorbacks added two more to make it 6-1, and from there the rout was on. With the Hogs up 9-1, a few fans started leaving in the 8th inning. It was hot, but our group was enjoying the win way too much to depart before the last out. I was saddened just a bit that only a few diehards remained to see Cayden Wallace’s two-run shot in the 9th.

There is a lot of baseball to be played, but the Hogs have started off on the right track. The Razorbacks have a day off Sunday, and our game Monday night will be against none other than the Ole Miss Rebels. That’s right, Ole Miss.

Let the hate flow through you. Go Hogs!

Editor’s note: Now in its 10th year, Tusk to Tail is the sport of tailgating as organized, performed and perfected by a group of Hog fans who have been tailgating together sober and otherwise for more than a decade. The primary focus of Tusk to Tail will be to follow the Hogs through the fans’ perspective with their insightful, irreverent, smart-alecky and sometimes practical style. The diehards may also be followed on their Facebook page. Or follow the crew on Twitter and Instagram, all @TuskToTail.