Razorback QB KJ Jefferson throws a pass during the Oct. 15 game with BYU in Provo, Utah. (photo by Mark Wagner)

Tusk to Tail: Leaving Provo with a win made sweeter with free ice cream and maple donuts

As the weekend began winding down along the journey home from Utah, every Arkansan I encountered was still basking in the afterglow. The trip to see the Razorbacks beat BYU 52-35 in Provo was absolute perfection.

Tusk to Tail has followed the Hogs from Rutgers, the birthplace of college football, to the Coliseum in Los Angeles. We have called them loud in the swamps of Florida, the pastures of Lubbock, and the mountains of Fort Collins, but no victory has ever tasted so sweet.

Friday afternoon got off to a rocky start at the Red Rock Brewery by our hotel in downtown Salt Lake City. We figured it was the perfect meeting spot as friends began to arrive in town during happy hour. But the Red Rock staff wasn’t very happy. We had already been told about restrictive local drinking laws stemming from Utah’s Mormon population. That was a factor for choosing to stay in the capital city rather than the dry college town. So as our party rapidly expanded from six to twelve to twenty thirsty customers ordering rounds of craft beer and ciders, our server laid down the law.

First we were told that we had to have some food on the table before we could order any alcohol. I guess having a drink with dinner is considered less of a sin than a standalone cocktail. OK, a $3 order of french fries took care of that.

Dale was further admonished for walking from table to table to visit friends while sipping one of Red Rock’s craft hard ciders. That kind of behavior might be acceptable in Arkansas bars, but was most certainly not allowed at their Salt Lake restaurant. When they told us their tables would be needed for customers with reservations, we finally got the hint. We were getting kicked out of the bar, but in the most friendly way possible.

“You’re telling me you can’t have a drink while standing up around here,” I asked, walking back to the hotel. I was afraid our tailgate might pop somebody’s head right off their shoulders. 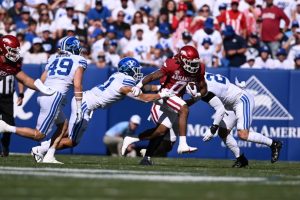 Sam had driven every mile from his home in Maumelle in the same Ram pickup that he drove to South Carolina and Colorado and Kentucky and so many games since. Coolers, generators, and our traveling satellite tv setup were packed under the covered bed. Dale’s infamous tailgate cargo carrier was loaded with tents and chairs, crisped by Sam’s dual exhaust. Walt’s truck carried cases of liquor and coolers of beer.

Perhaps the most valuable cargo was Tusk to Tail’s master tactician, Dale. It’s not easy to get two dozen people organized, transported, fed, and lodged, but Dale always brings solutions. I joke that he could pull off some “Weekend at Bernie’s” type hijinks. Each detail is so meticulously planned, we could even get a dead guy through the schedule without incident, as long as he’s got Dale’s Venmo.

In downtown Salt Lake City there is practically a steakhouse on every corner. There were three at our four-way intersection alone. On Friday, Dale wisely made reservations for 24 at Spencer’s, the one in our hotel. Any money saved from not needing Uber was applied toward their $16 cocktails. 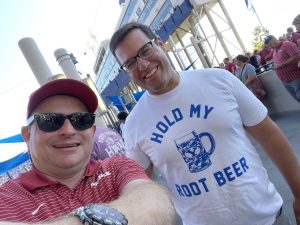 Tusk to Tail member David Rice takes a picture with a BYU fan.

Spencer’s service was impeccable, allowing our first glimpse of Utah hospitality. Despite the volume of our party, our server graciously took good care of us, even separating the checks at the end. The inevitable Hog call was tolerated, seemingly without judgment. A red meat feast ensued, followed by a nightcap round of whiskey.

Sunlight was beginning to peek over the eastern mountain range as we began driving to Provo Saturday morning. The backlit ambience around sunrise and sunset is stunning, a Patagonia logo come to life. Logan explained that the large body of water on the outskirts of Provo was not the Great Salt Lake, but rather a sodium-free counterpart. A handful of hot air balloons had begun liftoff to complete the picturesque scene.

Aside from the area’s natural beauty, commerce appeared to thrive throughout the prosperous region. Everything looked so new and clean along the interstate, even the stuff you see in every town like Best Buy or Bed, Bath & Beyond. With the scenic mountain backdrop, it was easy to imagine framed photos of every store proudly hanging on the wall at their corporate headquarters.

Since tailgating is mostly forbidden on the BYU campus, our destination was a hotel parking lot nearby. The adjacent parking lot belongs to the Utah Department of Workforce Services, which isn’t open on weekends. Surely they wouldn’t mind us borrowing their parking lot for a few hours. Two tailgates, one from each school, had already set up on opposite ends of the lot by the time we arrived. It’s not often that others get set up before us. 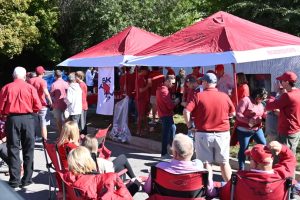 The Tusk to Tail tent near the BYU campus in Provo, Utah, prior to the Oct. 15 game. (photo by Mark Wagner)

We had 200 square feet of tents erected in the strip of lush grass within minutes, in addition to a paved section of spillover space filled with folding tailgate chairs. We waved our Hog flags high, but kept our drinking mostly under wraps. Booze was stored in boxes beneath buffet tables and beers were immediately poured into plastic cups.

It seems that the further we get from home, the more that others rely on TTT for their pre-game entertainment. We have had massive tailgates on the road at Rutgers, TCU, and Colorado State. As the Hog calls began to grow more frequent, one of our friends said he counted more than 110 guests.

The Hog calls were partly in response to the number of BYU fans passing by on their way to the stadium. At any other arena in the SEC, the home fans would likely double down on obnoxious behavior as a sign of solidarity. Not BYU. Short of circling up to sing Kumbaya, the Cougars fans could not have been any nicer.

Every single supporter graciously thanked us for coming and welcomed us to their town and campus. Their charmingly disarming attitude permeated the entire program. Volunteers greeted our players, coaches, and band. Others passed out free ice cream and Cougar Tails, a mammoth maple donut, throughout the visitors section. When I asked some Cougs fans if I could get a picture of their shirts proclaiming “BYU loves Arkansas” or “Hold my Root Beer,” they suggested we take a friendly selfie instead. Their generous hospitality reached so far that I considered asking strangers for a ride to the airport early Sunday morning.

Just a few short weeks ago, both of these teams were feeling pretty good about themselves. Arkansas was ranked in the Top 10 when they traveled to Arlington to face Texas A&M last month. BYU was ranked #12 before losing at Oregon around the same time. Subsequent losses by both teams made this matchup somewhat of a “must-win” game for both sides.

The urgency was apparent from the starting whistle as both teams went back and forth. BYU struck first on QB Jaren Hall’s 4-yard touchdown pass, but Arkansas countered with a 15-yard Rocket Sanders TD run to tie it 7-7. KJ Jefferson’s 6-yard pass to Trey Knox made it 14-13. The Razorbacks trailed 21-17 before consecutive BYU turnovers allowed Arkansas to take a 31-21 lead before halftime.

BYU made it interesting by pulling within 3, 38-35 in the third quarter. The Hogs never relinquished the lead, pulling away at the end. Jefferson threw for 367 yards and a career-high five touchdowns. Sanders rushed for a career-high 175 yards and a pair of TDs. The Hogs racked up 644 total yards to snap their 3-game losing streak. Wins in Austin or Athens over the years might have been more meaningful, but our opponents’ cheerful attitude, as well as their tasty treats made this win taste sweeter than any other in some time.

Young Forrest began gearing up for his second game of the day’s double feature, #20 Utah’s anticipated matchup with #7 USC in Salt Lake City. Forrest ended up storming the field after the Utes upset the Trojans, but I was too exhausted to consider joining him. Travel and a day beneath the unrelenting autumn sun takes a lot out of you. The inevitable sugar crash didn’t help.

As I bask in the afterglow of the perfect trip to Utah, I am reminded of the words sung by Terry Jacks.

“We had joy, we had fun
We had seasons in the sun
But the wine and the song
Like the seasons have all gone.”

We have a bye week to rest up before traveling to Auburn to do it all again. Bringing home a win sure makes it all seem sweeter.