Happy Razorback fans in the stands of Jordan-Hare Stadium at Auburn University. (photo by Mark Wagner)

When ranking SEC road trips, Auburn is always near the top of Tusk to Tail’s list. The drive isn’t too bad, and we have experienced some success down there, which always helps. The small town of Auburn and its picturesque campus present the perfect setting for football in the fall.

Toomer’s Corner, where the college intersects with charming historic downtown, practically becomes a Norman Rockwell painting sprung to life on game days. Rolling Toomer’s oaks after a victory and their War Eagle flying onto the field before the game are among the coolest traditions in college sports.

What really sets Auburn apart is the people. They may not offer their guests free donuts and ice cream like BYU, but Tigers fans are infinitely more hospitable than what you find across the state in Tuscaloosa. As the official state school and winner of multiple championships, the University of Alabama is practically overrun with “tee shirt fans” who have no real connection to the team. That leaves Auburn by itself on the eastern side of the state.

Nearly everyone who roots for Auburn either lives there, went to school there, or is at least related to someone who did. The fan base collectively refers to themselves as the “Auburn family,” and it makes a difference. They call us Gator Bait in Gainesville, and they say Tiger Bait in Baton Rouge, as well as some things I would never repeat in front of my mother. In Auburn, they simply welcome us to The Plains.

Of course it’s not all peace and love on the plains of Auburn. What’s a family without dysfunction? Playing little brother to the mighty Crimson Tide has led to some questionable decisions. 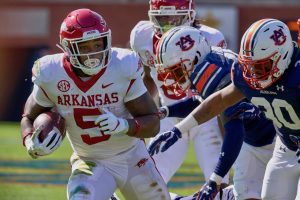 Competing with Bama requires stellar athletes and coaches, and the Tigers appear willing to pay handsomely for both. Outside Jordan-Hare Stadium, a giant banner commemorates former head coach Gene Chizik’s 2010 national championship. “Best team money can buy,” I told Dale. Auburn may have spent less on the life size bronze statue of Heisman quarterback Cam Newton than they spent on recruiting Newton himself. That all took place before the days of Name, Image, and Likeness (NIL) deals allowed student athletes to be paid aboveboard.

Less than two years after winning the championship, Chizik was unceremoniously sacked and replaced by Gus Malzahn, his former offensive coordinator. There have been similar ousters and attempted coups over the years. Toward the end of Tommy Tuberville’s tenure, it was discovered that boosters and board members were leveraging a deal to bring in Bobby Petrino. The Auburn administration denied any involvement until fans using flight tracking technology proved otherwise. The ensuing scandal kept Tuberville around a little longer, as well as paving the way for Petrino to eventually coach at Arkansas. 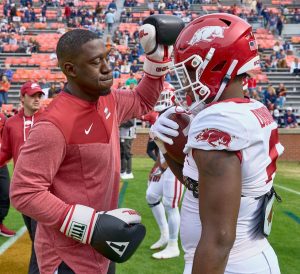 Boxing gloves are used in pre-game activities to help players train to avoid fumbling the football. (photo by Mark Wagner)

In 2017, Arkansas boosters and trustees allegedly planned to pursue Malzahn after firing Bret Bielema. It was rumored to be a done deal. Gus then spent the next three weeks beating #1 ranked Georgia and #1 ranked Alabama, who went on to play each other for the national championship.

Gus got a raise, and Arkansas wound up with Chad Morris.

Morris was let go less than two seasons later, having never beaten a Power 5 opponent. Malzahn hired him, but the duo could only muster six wins in the COVID-induced 10-game SEC schedule. And out the door they went.

Malzahn was replaced by Bryan Harsin from Boise State. Coincidentally, Harsin also replaced Malzahn at Arkansas State University when Gus took the Auburn job. Harsin is a good coach and seems like a genuinely good guy. But when his name surfaced as a possible replacement for Morris at Arkansas, it hardly moved the needle. Harsin isn’t flashy, and lacks the gaudy record of most big time college football coaches. He just doesn’t have the juice to fire up a passionate fan base. 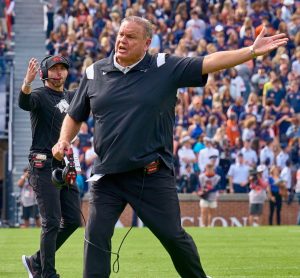 Head Coach Sam Pittman, with Offensive Coordinator Kendal Briles in the background, pleads his case with the officials. (photo by Mark Wagner)

So Auburn has meddled their way into tough times again. Harsin finished last season with a losing record of 6-7, and is now 3-5 this year. The athletic director who hired him has already been terminated, and it is a foregone conclusion that Harsin is next. Coach is a dead man walking. The family is already in mourning.

Sharing an elevator with an Auburn fan Saturday morning, we briefly discussed the day’s matchup. Arkansas was slightly favored, but at least one predictive index based on team talent gave the edge to the Tigers. I asked the man how he felt about the game.

“Oh we know we are going to get beat,” he replied. “By how much is still yet to be determined.”

That attitude prevailed across the town and campus, making Craig feel a little uneasy. The godfather of tailgating has been to every stadium the Hogs have played over the past couple of decades. Saturday was one of the few times nobody told him that he sucks.

The Hogs’ recent track record with Auburn only added to our anxiety. Arkansas had lost the last six games to the Tigers, dating back to 2016 when the #17 Razorbacks were thrashed 56-3 at Jordan-Hare. Some dubious officiating cost the Hogs in their last game at Auburn in 2020. A Bo Nix fumble recovered by the Razorbacks was incorrectly ruled a grounded ball, allowing the Tigers to kick the winning field goal. Arkansas received an official apology from the refs, but Auburn still got the W.

That screw job was probably still on Craig’s mind when what appeared to be an Auburn fumble was reviewed and ruled that the player was down. Craig raised his middle finger in response. Just a brief moment later, an Arkansas fumble was not reviewed at all before awarding possession to the Tigers. Craig silently raised the finger on his other hand for a double-fisted salute to the officials.

An Arkansas fan behind us kindly requested that he stop, explaining she didn’t want her grandson exposed to such. I didn’t have the heart to tell her that the double birds were actually a compromise. The godfather’s silent gesture spared her family a barrage of profanity typically only heard on the kid’s rap playlist. Craig took the high road, and relocated to some empty seats in the grown-up section.

“What we have here is two teams fighting out of last place in the west,” he texted during the ugly first half. “Just need to be alone for this one.”

The second half was a long string of feel-good hits. A sack and blocked field goal finished off the Tigers’ opening drive before KJ Jefferson found a wide open Jadon Haselwood in the endzone. The passing touchdown added to Jefferson’s two first half rushing TDs. Rocket Sanders blasted off 76 yards down the left sideline before freshman running back Rashod Dubionion scored the first of his two touchdowns. Sanders carried the ball 16 times for 171 yards, tying Madre Hill’s school record for the quickest to 1,000 yards in a season in just eight games.

Late in the third quarter, Auburn practically set a record rushing to the exits. Jeff said they took off like a rocket. Craig returned once the Hogs had committed to running the damn ball. There was a Hudson Henry sighting, and the Razorbacks even successfully executed one of Kendal Briles bullshit plays where everyone but the band seems to touch the ball.

“You know it’s our day when we run a trick play that’s not a debacle,” Chris said.

The greatest part of winning an SEC road game is that Arkansas fans completely take over the local entertainment district. Every Toomer’s watering hole was awash in Hog Calls, and there wasn’t a shred of toilet paper to be found dangling from their diminished oaks. I thought I would let Craig have the final word here, as he did leaving Baumhower’s Saturday night. “We’ll be back to beat your ass in another two years.”

As it turns out, this story has an epilogue. On Halloween afternoon, Harsin was liberated of his employment at Auburn. ESPN’s Chris Low reports that in just under two years, Auburn will have paid nearly $37 million to Malzahn and Harsin to not coach their football team. The dysfunctional Auburn family outbid us for Malzahn before firing him for Harsin two years later, leaving us stuck with Morris as a result.

It seems fitting that Harsin only lasted 21 games before getting canned. Morris made it to 22.