Long out as UA athletics director, ‘lost support’ of fans and alumni (UPDATED)

Long’s departure is effective immediately, but his contract provisions will be paid out through June 30, 2022. The total remaining on the contract through is estimated to be $4.5 million.

“The decision to change leadership in our Athletics Department is not an easy one, and was made after great deliberation, discussion and thought, after consultation with the Board of Trustees and President Bobbitt,” Steinmetz said in a statement. “Since coming to Fayetteville in 2008, Jeff has led our department with character and integrity and helped move us forward in so many ways. However, over the past year, Jeff has lost the support of many of our fans, alumni, key supporters, and members of the university leadership, support that I believe is critical in our pursuit of excellence. I want to thank Jeff for his commitment and service to our University and to the State of Arkansas and, on behalf of the Razorback Family, I want to wish Jeff and his family all of the best in the future.”

Steinmetz said the university will form a search committee to hire a new athletics director.

The departure of Long and head football coach Bret Bielema has been a much talked about subject following an underperforming fifth season for Coach Bielema in which the team is 4-8 overall and 1-5 in the SEC. Criticism is also mounting about the $160 million cost of a significant renovation of the football stadium.

Julie Cromer Peoples, interim vice chancellor and director of athletics at the University of Arkansas

Long was hired in 2008 to replace legendary athletic director Frank Broyles. Bielema was hired in 2012 from Wisconsin and has a 29-32 record at Arkansas. In the SEC, his record is 11-27. Five of those wins came in one season, and four have come against Ole Miss.

Prior to Bielema, Long was praised for the hiring of Bobby Petrino and for decisively firing Petrino in 2012 following an affair Petrino had with a member of the athletic department staff. However, Petrino was successful, and had a 34-17 record before his abrupt departure.

Before Arkansas, Long was Pittsburgh’s athletic director. Long was also named in October 2013 the first chairman of the College Football Playoff Selection Committee.

Peoples came to Arkansas in 2014, after tenures at Indiana University and the NCAA. Among other duties, as a member of the department’s executive leadership team, Peoples directs the sport administrator group responsible for day-to day administration of 19 varsity sports and serves as liaison to the Southeastern Conference. Peoples holds a master’s degree from Indiana University and a bachelor’s degree from Missouri State University.

STADIUM ISSUE
University of Arkansas officials unveiled plans in January for a $160 million expansion of Donald W. Reynolds Razorback Stadium in Fayetteville. The Board of Trustees approved the project in June by an 8-2 vote, but not without objections from board member and former U.S. Sen. David Pryor, who wrote to fellow board members the expansion plan “defies common sense.” 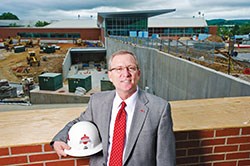 Photo of Jeff Long during the 2012-2013 construction of the Fred W. Smith Football Center on Razorback Road.

Just before the board’s June vote, five former UA board members — including Tyson Foods chairman John Tyson — also publicly opposed the expansion plan through a guest commentary that was published in the Arkansas Democrat-Gazette.

The north end zone expansion will increase capacity from 72,000 to 76,000, and is scheduled to be completed in time for the 2018 football season. The project will be funded entirely by athletic revenues, gifts and bond proceeds from a future $120 million bond issue, according to the UA’s preliminary financing plan. Bonds will be repaid over a 20-year period using athletic revenues generated from the stadium.

UPDATE
The UA issued a statement from Long on Wednesday evening. It read, in part:

I want to thank our outstanding coaches for their efforts on behalf of our student-athletes. Our coaches are not only great teachers but also care deeply about our students and worked tirelessly to achieve our mission of assisting student-athletes in reaching their full potential through intercollegiate athletics.  Winning was always an important part of our Mission, as was doing it the right way with honesty integrity and a focus on preparing our young athletes for the rest of their lives. Collectively, all of our coaches exemplified that mission.
It has been an honor and a privilege to serve under four Chancellors during my 10 years of service and to participate on their executive staffs.  I wish to thank Chancellor White, Chancellor Gearhart, President Sugg and Trustee Reed for believing that I could fill the formidable shoes of Coach Broyles and Bev Lewis.  I will always be grateful for the incredible opportunity to come to the University of Arkansas; it has been a 10-year labor of love.

I would also like to thank Chancellor Steinmetz and President Bobbitt for their support during their tenures and especially over the past several weeks.  I am grateful for having had the opportunity to work with you and wish you the best as you lead the Flagship Institution and the UA System.
Categories
Latest NewsTalk PoliticsTusk to Tail
Tagged
Jeff Long
0